The Luftwaffe Won’t Be Flying the F-35 Anytime Soon 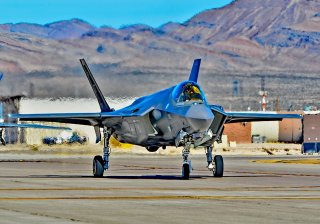 Germany’s Luftwaffe (Air Force) won’t be flying the Lockheed Martin F-35 Lightning II. The Bundestag, Germany’s parliament, has gone another direction and approved the acquisition of thirty-eight Eurofighter Typhoon fighter jets from Airbus in a deal worth a reported 5.4 billion euros. The aircraft will be the Tranche-3 variants and will replace the in-service Tranche-1 variant of the Typhoon.

The Bundestag made the announcement last week and comes as good news for the European multinational Airbus, which had affected by the coronavirus pandemic.

“The decision of the German Parliament to buy 38 Eurofighter, known as the Quadriga project, is a very strong message, not only for the German Air Force but also for Europe, in particular for European defense manufacturers,” said Dirk Hoke, CEO of Airbus Defense and Space via a video as reported by the Eurasian Times. “More than 100,000 jobs are based on programs like this.”

Not surprisingly, the decision didn’t sit well with Lockheed Martin. The European head of the company told the Financial Times in 2019 that such a decision by Germany not to adopt the aircraft could hamper the country’s ability to operate at the same level as its NATO partners that have adopted the fifth-generation stealth fighter.

“When we go off and collaborate together operationally, if you are flying stealth, fifth-generation jets, you don’t want a fourth-generation jet in the middle of your operations,” Jonathan Hoyle, vice-president for Europe at the U.S. defense group said in his 2019 interview.

Despite Hoyle’s criticism of the Typhoon, it has been seen as a lethal jet fighter. Germany’s Luftwaffe currently operates 141 Typhoons.

Even as Germany opted not to purchase the F-35, which is used by several other NATO nations including the UK, Italy, and the Netherlands—while there are reports Greece may be a potential buyer—the Bundestag’s acquisition plans include receiving a total of ninety-three Typhoons from Airbus, along with thirty Boeing F/A-18 Super Hornets. Fifteen of the Boeing aircraft will be the EA-18G Growler variant designed for electronic warfare.

The Super Hornets will replace the aging Tornado, which makes up the Luftwaffe’s fleet of fighter jets capable of carrying out a nuclear strike—something that the Typhoon is unable to do. With the nuclear-capable Panavia Tornado set to retire by the end of the decade, the Germans opted for an easy solution with the Boeing aircraft.

Germany also made the decision to purchase the Typhoons and Super Hornets/Growlers over Lockheed Martin in part to ensure the European defense manufacturing sovereignty. It was reported this would let Germany retain intellectual property of the aircraft, electronic systems and weapons—while also helping the Bundestag maintain its relations with France.

The Luftwaffe may also be looking past the fifth-generation F-35, as the French-based Dassault and Airbus are collaborating on a project to make a next-generation fighter to replace the Typhoons and Rafales that are currently in service.