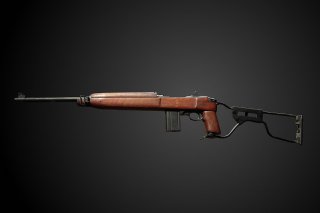 Despite its name and the fact that its basic appearance is similar to the M1 Garand, the M1 Carbine—officially the United States Carbine, Caliber .30, M1—wasn’t really a carbine version of the main battle rifle. The confusion lies in the fact that both were designated “M1” but that simply dates back to the U.S. Army naming system, which began on July 1, 1925. From that point, the "M" was simply the designation for “Model” while the number represented the sequential development of the equipment and weapons.

The “M1 Carbine” was instead the first carbine to be developed and thus while it does have similarities, these are in fact different weapons.

The M1 Garand—designed by Canadian-American John Garand at the Springfield Armory—features a gas-operated, rotating bolt system, a concept that has been commonly used with firearms chambered for high powered cartridges. The M1 Carbine also features a rotating bolt but it utilizes a short-stroke piston, which enables better control of the weapon due to the fact that less mass is needed to be stopped at either end of the bolt carrier travel.

The confusion between the two weapons isn’t helped by the fact that both are designated as firing “.30 caliber” but the distinction is that the M1 Carbine fires the .30 carbine (7.62x33mm) whereas the M1 Garand fires the .30-06 Springfield (7.62x63mm) round. In this regard the .30 caliber is similar to how the Soviets utilized various 7.62mm rounds—including the full-size 7.62x54mmR rifle round, 7.62x39mm intermediate cartridge (which was used in the SKS and AK-47) and the 7.62x25mm pistol/submachine gun round.

More importantly, the American .30 carbine cartridge, which was designed specifically for the M1 Carbine, is a light rifle round and shouldn't be seen as an intermediate round—notably those used with modern assault rifles. In fact, the rimless .30 Carbine was basically an improved design based on the much older .32 Winchester Self-Loading cartridge or 1906, which was introduced for the Winchester Model rifle. The .30 Carbine fired a lighter bullet but utilized modern power, so it was six hundred feet per second faster and 27 percent more powerful than its parent cartridge.

The straight case and rounded nose have also convinced some to believe it was designed for use in pistols, but this wasn’t actually the case. In fact, the M1 Carbine was developed as a weapon that offered greater firepower than the military pistols of the era but weigh lighter—and thus easier to carry—than the full-sized M1 Garand. It was clear to military planners that support troops including staff, mortarmen and radiomen; as well as officers and even some NCOs needed a more compact weapon.

The M1 Carbine also addressed the calls for a compact, lightweight defense weapon with a greater range, accuracy and firepower than a sidearm. The fact that the carbine weighed about half that of the Thompson submachine gun or M1 Garand, helped convince the military planners that this was the right weapon for the job.