M230: Could This Gun Be the U.S. Military's Ultimate Weapon? 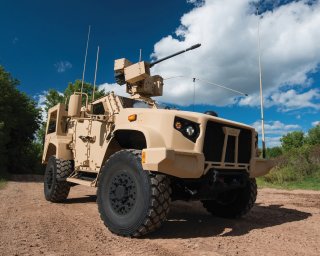 The M230 is probably one of the definitive weapons of the Global War on Terror. Mounted on the belly of Apache gunship helicopters, the M230 has provided critical fire support to U.S. troops in almost every theatre they’ve engaged in combat in.

But now as the military considers ways to enhance the firepower of ground vehicles, the M230 is attracting attention again as a lightweight solution to add heavy firepower to a ground vehicle. But can it be easily adapted to the ground role? How does it compare to the larger 30mm Bushmaster cannons?

The M230 from its outset was designed for use in an aerial role. For instance, it uses the 30x113 rounds originally designed for DEFA and ADEN cannons for fighter jets. Moreover, it also uses a linkless feed as it's assumed to be mounted in a way in which this will always be possible (e.g., Upside down on the belly of a helicopter).

Its ammunition is notable as it has a relatively low muzzle velocity compared to other cannons. As it made for air to air combat, velocity was a secondary concern as most planes have light to no armor. The explosive effect of the round was expected to produce the results desired on target.

To compare, the muzzle velocity of the 30x113mm the M230 is around 810 m/s. Comparatively, the 30x173mm cartridge used in the A-10’s GAU-8 rotary cannon and the 30mm Bushmaster II has a muzzle velocity of 1020 m/s (for a High-explosive incendiary cartridge, armor-piercing rounds go even faster).

As such, the M230 is reliant on an high-explosive, dual-purpose (HEDP) round with a small shaped charge in its nose to defeat armor. This potentially lessens the explosive filler of the round, as there must be hollow space for the copper jet to form with the shaped charge.

However, due to safety concerns with the HEI round for the M230, the HEDP round is the primary combat round for the Apache throughout the war on terror. It has proven effective for fire support.

In a ground role, the HEDP would likely be effective against soft targets and light unarmored vehicles as it has proven in Afghanistan and Iraq. However, the penetration performance of the round could prove lacking. Northrop Grumman cites the performance as 25mm of RHA at 50 degrees at 500 meters.

While this is probably good enough for most infantry fighting vehicles (IFVs) and armored personnel carriers (APCs) of the current generation, it would fail to perform against heavy IFVs. The reliance on a shaped charge also means that slat or spaced armor might easily defeat it, compared to pure anti-personnel (AP) rounds, which would simply pass right through slat armor.

The round technology used in the M230 does have benefits. The individual round's smaller round and lightweight characteristics (as it was designed for helicopters) mean more can be carried, and the additional weight of the weapon system is minimized.

In the transition to a ground mount, a linked feed was introduced into the M230, and a delinker was attached to the cannon. This makes the ground version heavier than the air version, but the system was expected to be slightly heavier overall due to the additional barrel length. The linked feed is also more complex but necessary for the flexible overhead mounts in which the M230LF had been tested.

The primary platform on which the M230LF is planned to be mounted on are the military’s new series of armored cars: the MATV and the JLTV. Putting an M230 LF on these platforms would prove to be a significant upgrade from existing CROWS systems, which only mount a .50 caliber machine gun.

However, the ammo for the system is likely to take up a lot of space, so as per the military’s plan, the cannon system will likely not be deployed on every vehicle. On those that it is, they would likely prove to be effective fire support platforms, delivering more effective high explosive shells out to a few kilometers.

The system wouldn't have the advanced features (such as airbursting rounds and real armor piercing rounds) found on the 30mm Bushmaster II that's planned to be mounted on the Stryker. However, the turret is far lighter and represents an interesting middle ground between a full-fledged 30mm cannon system and lighter heavy machine gun and automatic grenade launcher systems.