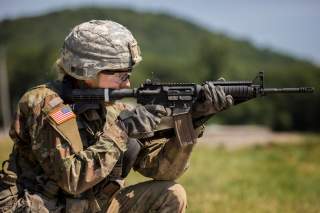 Despite the failure of all attempts to replace it, the M4 is growing obsolete.

The US military has attempted to replace the M4/M16 series of weapons for almost five decades. From flechette-firing prototypes to rifles that used caseless ammunition firing in hyperbursts, no weapon was considered to provide enough of an improvement over the M16 to replace it.

Only a shortened version of the M16, the M4 eventually replaced the M16 in front-line issue rifle throughout the 2000s. At the same time, the military gave up on its development of the Objective Individual Combat Weapon (OICW) that combined a twenty-five millimeter airburst grenade launcher with a 5.56 firing rifle.

The OICW later evolved into the XM25 “Punisher” twenty-five millimeter grenade launcher which had the ability to airburst grenades behind cover enemies were hiding behind. Unlike earlier attempts, the XM25 was meant to augment the firepower of an M4 armed squad, replacing one M4.

However, even this innovative weapon failed to replace the M4. Soldiers found the weapon and ammunition too heavy, and the weapon suffered a series of serious malfunctions during combat testing in Afghanistan. The program was officially terminated in 2018.

Despite the failure of all attempts to replace it, the M4 is growing obsolete. Major advances in body armor technology have made armor lighter, stronger, and more suited for general issue. Russia’s latest armor plates have the ability to withstand most bullets fired from an M4, including the new M855A1 round which has a steel penetrator.

For a time, the Army considered adopting a 7.62x51 millimeter rifle as the Interim Combat Service Rifle (ICSR). The 7.62x51 millimeter round has the ability to apply more energy when it hits the target due to the larger bullet and increased velocity. But it’s questionable whether going to 7.62x51 millimeter is the right solution. Apparently Army brass shared this skepticism, and the ICSR program was canned in late 2017.

Only wireframe mockups of the weapon have been shown in official media and presentations, but the primary objective of this weapon is to be powerful enough to punch through current and possible future body armor.

While some outlets have described it as having the power of a “tank gun”, this is inaccurate. The NGSC will shoot a projectile with far less energy than that of a tank gun. The titles that say that rather derive from the fact that chamber pressures in the NGSC are expected to be around the same range found in tank guns.

One key part of the NGSW program though is that the round technology is expected to be more advanced. The LSAT that was developed was a 5.56 millimeter weapon, and while the 5.56 CT rounds used in the LSAT have the potential to be slightly more powerful than regular 5.56 millimeter rounds, the US military is likely looking at a totally new caliber for NGSW due to its need to overmatch enemy body armor.

Textron perhaps has looked ahead and anticipated this trend. While they continued developing the LSAT in 5.56, they did show a 6.5 millimeter cased telescoping carbine at AUSA 2017. Going to 6.5 seems like a logical step for NGSC and NGSAR as most existing 6.5 cartridges retain energy at range better than similar 5.56 loadings. Serbia has been trialing 6.5 rifles in a marksman role, with good results.

The need to adopt a new cartridge to penetrate enemy armor might be the reason why NGSC finally is the program that will replace the M4. Earlier efforts to replace the M16 and M4 focused on improving hit probability and accuracy (the ACR trials), or improving reliability and lessening weight (the XM8 program), or adding totally new capabilities to the individual weapon (the OICW program). With a simple focus on increased lethality versus a specific threat rather than trying to make improvements in other metrics, NGSC might finally offer enough improvement compared to the regular M4 to make the conversion worthwhile.

At the same time, Special Forces continue to modify the M4 carbine to fit their specific operational needs. USASOC has recently purchased the new Upper Receiver Group (Improved) or URGI, a package that integrates a bunch of ergonomic improvements and a new M-LOK rail. The URGI is said to substantially lighten and improve the handling of the M4 rifle compared to earlier quad rails.

While the “big” Army prepares to trial and adopt its next rifle, the M4 continues evolving and soldiering on.