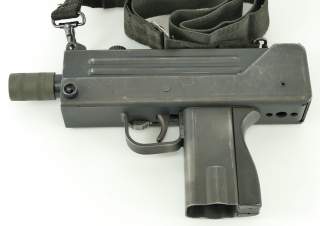 For roughly a 20-year period from the mid-1970s to the mid-'90s the MAC-10 submachine gun was everywhere. At least that’s what you might think if your only exposure to the weapon is action films and T.V. shows from the era.

The compact MAC-10 first registered in America’s collective imagination when John Wayne wielded one with lethal prowess in the 1974 police thriller McQ.

After that, the MAC-10 became a standard prop gun, often appearing prominently in several feature films and episodes of popular T.V. shows, such as The A-Team and Miami Vice, in a single year. A veritable who’s-who of Hollywood elites, action superheroes and B-movie regulars fired a MAC-10 at someone on screen at some point.

And that’s just a sample.

The MAC-10 was so prominent in American culture during its heyday that its manufacturer advertised it—or, more accurately, the follow-on MAC-11—as “the gun that made the ’80s roar.” But by the time the ’80s actually rolled around, the MAC-10 family of guns had already fallen from grace on the commercial market.

The MAC-10's manufacturer, Military Armament Corporation, had hoped to become a leader in the growing market for military and police submachine guns. However, despite the gun’s popularity among movie producers, it never really caught on with professional operators. A handful of forces and agencies gave the MAC-10 a try, but most quickly abandoned it due to some rather glaring performance problems.

Military Armament Corporation went out of business in 1976.

The MAC-10, however, maintained its iconic status in American pop culture through the 1990s, even though street gangs and drug cartels were, by then, its primary users. Eventually, the gun faded from the silver screen.

American gun-designer Gordon B. Ingram began development of what would become the blowback-operated, select-fire MAC-10 in the mid-1960s. Ingram worked through several prototypes, ultimately settling on the 10th iteration of the weapon, which he dubbed the Model 10.

The final model is an unrefined, boxy little gun the size of a pistol. Depending on who you ask, the MAC-10 is, technically speaking, a machine pistol rather than a submachine gun.

Measuring only 267-millimeters in length with its wire stock collapsed, the MAC-10 is easy to conceal and handy in close-quarters combat, attributes that could be particularly appealing to special operators and law enforcement.

The grip is centered in the body of the gun to provide some balance. The gun was originally available in two calibers — .45 ACP and nine-by-19 millimeter. A 30- or 32-round magazine, depending on the caliber, inserts into the base of the grip. Later models and variants accepted .380- and even .22-caliber ammunition.

The gun originally operated with an open bolt system with a cocking handle on the top of the upper receiver. The open-bolt design dictated the seemingly odd placement of the cocking handle, which made it impossible to add an optics rail to the weapon. Not that a notorious lead-spray like the MAC-10 would benefit from optics.

Closed-bolt models, with cocking handles on the side, came later. The stubby barrel has trademark grooves at its base near the receiver so the user can twist on a suppressor.

The MAC-10 is not without its charms. Its simple but sturdy design makes it reliable and durable. It can also throw a lot of lead — in a hurry. Both the .45-caliber and nine-millimeter versions fire at a minimum cyclical rate of 950 rounds per minute. By comparison, the M-16 and AK-47 have cyclic rates of approximately 800 rounds per minute.

Durability and a high rate-of-fire are admirable qualities in a firearm, but a weapon also needs to be functional and, hopefully, versatile. It has to perform in the field, preferably in multiple scenarios.

Granted, the MAC-10 and the M-16 are different guns for different purposes, but even among submachine guns 50 yards is a rather abysmal range. Both the Uzi and MP5, for instance, have effective ranges of at least 100 yards.

A good deal of the accuracy problems arose from the MAC-10’s short barrel, which is only 146 millimeters in length. But the gun also suffers a lot of muzzle lift. The powerful rapid-fire action means excessive kick.

Designers tried to address this by adding several features to help stabilize the weapon during firing— a sound suppressor that could also function as a forward grip, a hook for a leather grip-strap at the front of the receiver and an extendable wire stock.

The suppressor potentially made the weapon more attractive to special operators by adding stability and cutting down on muzzle report.

The stock, however, is all but useless. The late Ernest “Barry” Elliot of the popular YouTube series Firearm Facts and Gun Gripes worked at RPB Industries’ MAC-10 factory in the early 1980s. In one Firearms Facts video he discusses the MAC-10 in general. “I never liked this stock,” he says. “It’s flimsy and doesn’t provide much support.”

Despite possible issues with the MAC-10’s accuracy, there was still some interest in the weapon among military and police forces. When Ingram’s MAC-10 caught the attention of U.S. military officials, he began looking for investors to fund mass production of the weapon, which led to the formation of the Military Armament Corporation.

Combining Military Armament Corporation’s acronym MAC with the Ingram’s “Model-10” designation for the gun gave the MAC-10 its popular name.

The U.S. Army put the gun through trials and evaluation. In his book Assault Weapons, Jack Lews writes that at one point the Army even considered replacing the Colt .45 with the MAC-10 as the standard sidearm. Ultimately, the Army passed up the MAC-10 and adopted the Beretta M-9 as its sidearm, instead.

The Army wasn’t the only organization to pass on the MAC-10. Before the U.K. Special Air Service counter-terrorism Special Projects Team adopted the HK MP5, it considered the MAC-10, as well.

“Initially, the Ingram MAC-10 was used, but after the SAS had shot the MP5 while doing cross-training with GSG9, the HK gun was chosen,” Leroy Thompson writes in The MP5 Submachine Gun.

“The author can attest from using the MAC-10 and the MP5 that there is no comparison when surgical precision is needed,” Thompson adds. “The MP5 was definitely the correct choice for hostage-rescue situations.”

Poor performance reviews from a couple of potential buyers wouldn’t necessarily be the end of the world, but they also weren’t the only trouble MAC was facing. The Arms Export Control Act of 1976 greatly restricted the export of weaponry that could be used for military purposes, and included additional restrictions on the export of suppressors.

Without the suppressor, the MAC-10 was nowhere nearly as attractive to potential military and police clients.

Military Armament Corporation quit producing the MAC-10 in 1973, filed for bankruptcy in 1975 and transferred rights for the MAC-10 to Georgia-based RPB Industries, Inc. in 1976. Several companies continued producing parts and variant designs of the MAC-10 — perhaps most notably the semi-automatic Cobray versions — but the gun still never saw widespread use among military and police.

However, the same design elements that made the MAC-10 theoretically suitable for police and special forces — concealability, a high rate of fire, maneuverability in close quarters — also made it attractive to other elements.

In Lethal Passage: The Story of a Gun, Erik Larson examines the history of the MAC-10 and several of its variants, such as the smaller-caliber MAC-11 and the semiautomatic Cobray, in American culture. Larson is careful to distinguish between the variants.

Hollywood may not have tricked the militaries of the world into using the MAC-10, but it sure convinced a whole bunch of murders to do so. The MAC-10 was used in several high-profile homicides throughout the ’80s and ’90s.

Hitmen wielded a MAC-10 in the infamous 1979 Dadeland murders in Miami, when they killed drug kingpin Jimenez Panesso and one other person at the Dadeland Mall in broad daylight in front of several witnesses.

In June of 1984 a member of the Neo-Nazi Order killed radio talk show host Alan Berg with a .45-caliber MAC-10 as Berg stepped from his car in Denver. It took only a few seconds to completely riddle Berg with bullets, leaving a total 34 entrance and exit wounds in his head and body. Four years later another member of the Order used a nine-millimeter MAC-10 to kill a Missouri state trooper.

In 1991 a disgruntled ex-postal worker armed with an Uzi and a MAC-10 shot dead two former colleagues and the boyfriend of a former supervisor. These are only a few of the high-level murders involving MAC-10s that Larsen cites.