Mach 5 BOOM: The U.S. Army Is Getting Trucks Armed With Hypersonic Missiles 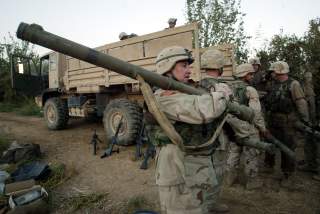 Key Point: The age of hypersonic missiles is here.

A Powerpoint slide at a recent defense conference showed details of the Long-Range Hypersonic Weapon, or LRHW,  a land-based U.S. Army system. The LRHW is one of multiple U.S. military projects to develop weapons that travel at hypersonic (faster than Mach 5) speeds. The Army is aiming to deploy the first experimental LRWH battery in 2023.

The slide, shown at the 22nd Space and Missile Defense Symposium in Huntsville, Alabama earlier this month, depicts the planned first LRHW battery. It consists of a prototype ballistic missile – an All Up Round, or AUR -- encased in a canister. The missile has a diameter of 34.5 inches. By comparison, a Tomahawk cruise missile only has a diameter of about 20 inches.

Atop the missile is a Common Hypersonic Glide Body (C-HGB). Developed by Sandia National Laboratory, the C-HGB will be used by the Army, Navy and Air Force. It is a boost-glide weapon, lofted high into the atmosphere by the missile, and then gliding down at high speeds. Unlike an ICBM’s warheads, which descends on a fixed trajectory, these gliders have small wings to maneuver at high speeds within the atmosphere (presumably without burning up) before they hit the target.

The C-HGB is probably based on the Army Hypersonic Weapon, or AHW. A boost-glide vehicle, the AHW was tested in 2011 and achieved a speed of Mach 8 and a range of almost 4,000 miles. That’s slower than an ICBM warhead that descends through the atmosphere at speeds of up to Mach 23, but unlike a ballistic missile warhead, a boost-glide vehicle can maneuver to evade interception.

The LRHW is part of a new hypersonic arms race between America, Russia and China. For a time, America seemed to lag in the race, as news reports breathlessly announced one alleged Russian “superweapon” after another. In particular, the Avangard – a glider boosted atop a converted ICBM – supposedly descends at 27 times the speed of sound. The Khinzal – a hypersonic missile launched from a bomber or even a MiG-31 fighter – reportedly has a speed of Mach 10. As for China, Beijing is developing its own hypersonic weapons.

The U.S. is now catching up with a vengeance. The Pentagon is working on at least nine separate hypersonic weapons projects, according to Aviation Week & Space Technology magazine. There is also the Conventional Prompt Global Strike program, which aims to develop a conventional missile or glide vehicle that can hit any spot on Earth in one hour or less.

Considering that these weapons have yet to be used in combat, or fielded in a meaningful way, it’s hard to say exactly what the effect of hypersonics will be. Their high speed will make interception much more difficult, though the U.S. is also beginning to study defense against hypersonic weapons.