Mach 7.3 'Bullets': The U.S. Navy Tested a "Hypervelocity Cannon Round" 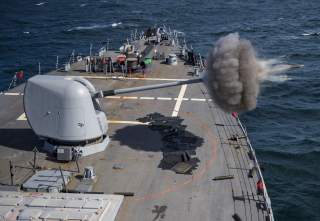 The U.S. Navy tested a new hypervelocity cannon round during a war game in 2018, the news website of the U.S. Naval Institute reported.

The previously undisclosed test shots represent an important advancement for the U.S. fleet as it scrambles to keep pace with the Chinese navy's own hypersonics developments.

The destroyer USS Dewey fired 20 hypervelocity projectiles, or HVPs, from its standard Mk.45 5-inch deck gun, officials familiar with the test said, according to USNI News.

According to USNI News, the trial was part of the biennial Rim of the Pacific war game that took place near Hawaii in the summer of 2018. It’s unclear how effective the test-shots were.

The Navy and the Pentagon's Strategic Capabilities Office, a secretive incubator for new weapons, reportedly oversaw the shoot.

Any vehicle or projectile that travels faster than five times the speed of sound technically is "hypersonic." The Navy's Mk. 45 deck gun fires 70-pound conventional explosive shells at a muzzle velocity of around Mach 2.2 out to a distance of 13 miles. The 28-pound hypervelocity projectile reportedly travels as far as 50 miles at Mach 7.3.

"The HVP is a next-generation, common, low-drag, guided projectile capable of executing multiple missions for a number of gun systems, such as the Navy five-inch; Navy, Marine Corps and Army 155-mm systems and future electromagnetic railguns," BAE Systems, which builds the hypervelocity shell, explains on its website.

According to BAE, the HVP could be effective against ground and sea targets, cruise missiles and ballistic rockets. "Types of missions performed will depend on the gun system and platform."

The key to the HVP's high speed is its low-drag aerodynamic design. To fit guns of different calibers, the HVP fits inside a range of ejectable casings that separate from the cone-shaped projectile shortly after it exits the gun.

The hypervelocity projectile is a kinetic-energy weapon. It lacks a warhead, an instead destroys its targets through the sheer force of its impact. BAE acknowledges that the new projectile requires "accurate guidance electronics" on the ship or artillery piece firing it.

Dewey's test-firing came just a few months after China revealed its own hypervelocity ship gun. In January 2018 a photo appeared on the Chinese internet depicting the Chinese navy landing vessel Haiyang Shan moored at a river base while carrying a new kind of large cannon on its deck.

In March 2018, Chinese state media confirmed the cannon was an experimental railgun. A new photo that appeared in December 2018 seemed to show Haiyang Shan on the open sea, possibly while conducting test-firings of its new gun.

A railgun propels its projectiles to hypersonic speed by way of magnetic force, as opposed to explosive-powder charges that conventional guns use. But as Dewey's crew proved, it's possible to fire a hypersonic shell from a powder gun.

In 2016, Robert Work, the Obama administration's deputy secretary of defense, advised the incoming Trump administration to consider investing in hypervelocity projectiles rather than in railguns.

“We thought railguns were something we were really going to go after, but it turns out that powder guns firing the same hypervelocity projectiles gets you almost as much as you would get out of the electromagnetic rail gun, but it’s something we can do much faster," Work said.

The U.S. military is hoping that it can leapfrog China's own railgun advancements by equipping existing guns with Mach-7 shells. "We now think that we can do pretty revolutionary things with existing powder guns -- think howitzers, [U.S. Army] Paladin [self-propelled artillery], the Navy’s five-inch guns," William Roper, who then headed the SCO, said in 2016. "We’ve shifted emphasis to that."

“We have a thousand powder guns," Roper added. "We have very few railguns."