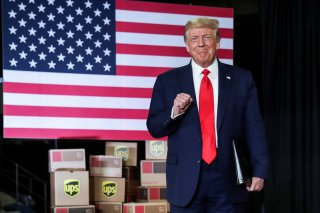 Commemorative firearms aren’t for everyone—they’re more collector’s items than actual “shooting guns,” even if some might feel the special engraving and design might be too kitschy or even gaudy. But as display pieces go, Kahr Firearms Group has taken this to a new level with its Magnum Research, Inc. Presidential Desert Eagle.

This new handgun honors Donald Trump—so all that’s missing is a MAGA hat.

For this very special version of the famous Desert Eagle, Kahr Firearms Group partnered with West Monroe, Louisiana-based Outlaw Ordnance on the design and promotion and the result is one that wouldn't be out of place on the walls of Trump’s apartment on Fifth Avenue or a patriotic man cave in the heartland.

The artists at Outlaw Ordnance ornately engraved the slide and frame with detailed illustrations depicting Trump, his signature, motto, title, and elegant scrollwork. Within the scrollwork are hidden “Easter eggs” commemorating various achievements throughout his life, while the left side of the slide denotes his status as “45th President of the United States.” In addition, the polished Hogue aluminum grips contain the Presidential Seal, and images of the Trump family. All metal surfaces on the gun are matte stainless.

This specially adorned .50AE pistol will be distributed exclusively by Davidson’s Inc.

The limited-edition commemorative Presidential Desert Eagle started life as a Magnum Research Model DE50SRMB, which is 100 percent made in America. The barrel is six-feet long with an integral muzzle brake and rail for optics mounting. The frame features a rail for accessories. Sights are a fixed combat type. The entire gun is made in the United States, from stainless steel. One seven-round magazine is included.

A Powerful Handgun to Honor the POTUS

Given Trump’s bombastic nature, it would be hard to think of another handgun that so captures his style and flare.

The world-famous Desert Eagle has earned a reputation for being more hand cannon than a handgun, in part because it uses a gas-operated mechanism normally found in rifles, as opposed to the short recoil or blow-back designs most commonly seen in semi-automatic pistols. The advantage of the gas operation is that it does allow the use of far more powerful cartridges than traditional semi-automatic pistol designs. And as a result, this allows the Desert Eagle to compete in an area that had previously been dominated by magnum revolvers.

About the only complaint one might have is that you might need a Trump-sized bank account to pay for this customized version of the classic Desert Eagle DE50. Magnum Research ships the Presidential Desert Eagle with one seven-round magazine at a price of just over $3,000. Davidson's is the sole distributor of this limited edition handgun. It is a handgun fit for a king—or perhaps a president.