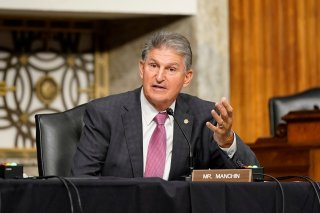 As Democrats continue their efforts to pass some form of President Joe Biden’s highly contentious Build Back Better bill, Senator Joe Manchin (D-WV) once again stated that he will not support an extension of the enhanced child tax credit without a work requirement for parents.

“I’ve been basically very clear on that,” Manchin told Business Insider. “I think there should be a work requirement. That means you file a 1099.”

He continued: “So I’ve been very, very direct on that.”

In addition to a work requirement, Manchin has also called for a household income cap of around $60,000 in order to receive the child tax credit.

From July to December, the federal government gave eligible parents as much as $3,600 for a child under the age of six and up to $3,000 for children between ages six and seventeen. This means that a $250 or $300 payment for each child was direct deposited to parents each month.

However, if the Build Back Better package is not passed, the maximum child tax credit would plummet by $1,000 per school-aged child and $1,600 per child under six. Adding to the concern is that millions of the nation’s poorest families would become ineligible for the credits once again.

Manchin’s work requirement would still mean that the poorest Americans would not receive the monthly payments—even though they are the very group that the credits were designed to help financially.

Recent surveys and studies have shown that the enhanced child tax credits have been a lifesaver for millions of children and parents.

“After half a year of child tax credit payments, it is clear that American parents have used this money to pay for the basic necessities families need: food, housing, and childcare,” Bethany Robertson, co-director of ParentsTogether, noted in a statement.

A separate analysis released by the Center on Budget and Policy Priorities warned that nearly ten million children could potentially fall back into poverty without an extension of the credits.

“The enhanced tax credit has enabled parents across the country to pay for food, clothing, housing, and other basic necessities,” the think tank’s authors said in the report.