Marianne Williamson: ‘Fox News Is Nicer To Me Than The Lefties Are’ 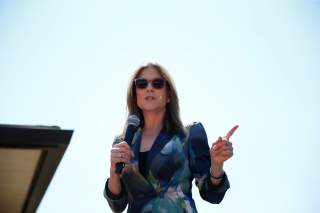 2020 presidential candidate Marianne Williamson was caught on a hot mic earlier in September wondering why conservatives are nicer to her than people on the left.

Williamson, an author and self-help guru, was speaking to “America This Week” host Eric Bolling when shortly after the interview she continued talking while her mic was still on. She was caught asking why “Fox News is nicer” to her “than the lefties.” She also admitted that she gets why people call the left “godless.”

“It’s such a bizarre world. You know I’m such a lefty. I mean, I’m a serious lefty but they are so — I understand why people on the right called them godless — I mean, it’s like, I didn’t think the left was as mean as the right, they are,” Williamson continued.

Bolling brought Williamson on his show Wednesday and played the clip so she could clarify the comments.

“Well, what I was told was that if I came on your show, you wouldn’t blast it out, and you just blasted it out. So … I don’t even know where to go with that,” Williamson said after hearing her comments. Bolling defended his decision to air them, and Williamson then explained what she meant.

“I understand how it goes, that’s all I meant,” she said.