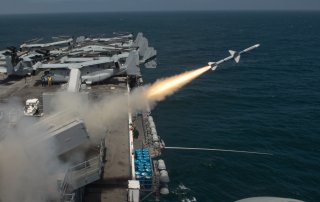 To support future island-hopping amphibious operations in the Pacific, the U.S. Marine Corps is preparing to field forthcoming capabilities, including its new Light Amphibious Warship and land-fired variant of its Naval Strike Missile (NSM).

The NSM has been in development as a deck-launched “over-the-horizon” offensive strike capability for the Navy’s Littoral Combat Ship and other warships, yet the Corps has simultaneously been preparing to integrate a land-specitic, anti-ship NSM into its inventory.

Interestingly, the Navy and Marine Corps have been working with the Army to explore how to use land-based munitions to attack ships at sea. As one senior Army weapons developer described to The National Interest, “It does not matter if a target is over the ocean, we can still fire at it and attack from land.”

These kinds of efforts included using land-fired rockets and artillery to target and destroy maritime targets. NMESIS, which is a ground fired NSM, is the first actual application of its Ground-Based Anti-Ship Missile (BSASM) program.

The Marine Corps GBASM is intended to be a disaggregated, multi-domain mix of combat tactics and variables to include advanced maritime, air, and land-based operations. It will also support newer kinds of land-sea “island hopping” amphibious assault wherein Marines and even heavy weapons transport and transition quickly from sea to shore and back.

“Everything our adversaries have designed over the last 20-30 years are intended to counter [the Department of Defense’s] ships and aircraft,” McPherson stated. “The Marine Corps bringing a ground-based solution complicates [the adversary’s] ability to counter our anti-ship capabilities since ground-based launchers, as we’ve found in previous wars, are hard to find. This is what NMESIS brings to the fight—a launcher that is survivable inside the enemy’s weapons engagement zone.”

Should the Navy need to land on coastal or island areas and launch an integrated land-sea-air maritime warfare campaign, dismounted Marines ashore will now be fortified by new, highly lethal land-fired anti-ship weapons. The weapon’s range and precision guidance technology will enable Marines to defend their positions ashore as well as target enemy ships at sea in support of “blue-water” operations.