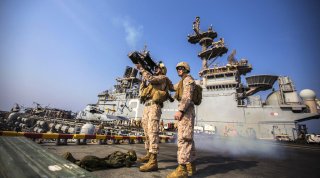 “The Marine Corps must be able to fight at sea, from the sea, and from the land to the sea; operate and persist within range of adversary long-range fires; maneuver across the seaward and landward portions of complex littorals; and sense, shoot and sustain while combining the physical and information domains to achieve desired outcomes,” according to a strategy paper called Force Design 2030.

The paper notes that maneuvering into attack position might be entirely different should targeting and surveillance specifics be arriving in seconds from various nodes across a “meshed” or interconnected data network. Faster, more precise firepower, enabled by sensor-gathered, distilled and organized pools of otherwise disparate sources of incoming data, can mean finding, attacking and even destroying an enemy more quickly. These variables, when viewed as an integrated or networked “whole,” can merge classic warfare concepts of the Marine Corps such as maneuver warfare and the use of heavy yet precise firepower combined to introduce unprecedented combat dynamics.

In the future, U.S. Marines and the Navy will be able to detect and thwart anti-ship missiles more quickly and at greater ranges, which will be made possible in part by advanced networking and sensor systems such as Northrop Grumman’s Surface Electronic Warfare Improvement Program Block 3 and a Northrop Grumman radar system called The AN/TPS-80 Ground/Air Task-Oriented Radar (G/ATOR). G/ATOR is intended to successfully enable more dispersed yet interconnected multi-domain maritime warfare. This brings the advantage of proximity while simultaneously allowing both greater stand-off range and a much wider operational combat area within which to maneuver and conduct operations.

The Navy’s Project Overmatch is geared toward joint, multi-domain warfare operations. This is why Northrop Grumman is looking at ways to further integrate its Navy-specific networking technologies with its Army, network-enabled Integrated Air and Missile Defense Battle Command System (IBCS) command and control program. Employing common technical standards, a Modular Open Systems Approach design, and a dispersed base of ground platforms including Patriot Missiles and Sentinel Radars, IBCS seeks to find incoming threats and seamlessly integrate threat track data across a network of defensive combat “nodes” set up to speed up sensor awareness across the force and massively improve the sensor to shooter or interceptor fire control loop. In fact, IBCS has already operated with aerial platforms such as an F-35 fighter jet, so it would not be at all surprising to see ship-based active electronically scanned radar woven into some kind of joint IBCS-like system.

In fact, in July of this year, the U.S. Army successfully engaged a cruise missile target in a highly contested electronic attack environment during a developmental flight test using IBCS. The test at White Sands Missile Range in New Mexico demonstrated the integration of IBCS and G/ATOR. It incorporated first-time live testing and demonstration of a Joint Track Manager Capability. This provided a bridge between IBCS and the Navy’s Cooperative Engagement Capability, enabling the integration of G/ATOR track data on the IBCS Integrated Fire Control Network to enable a successful intercept of the cruise missile. The flight test also incorporated two F-35 combat aircraft integrated on the network with onboard sensors contributing to the IBCS developed joint composite track used to perform the engagement. Certainly, something along these lines would align with the overall vision of the Defense Department’s critical Joint All-Domain Command and Control effort.