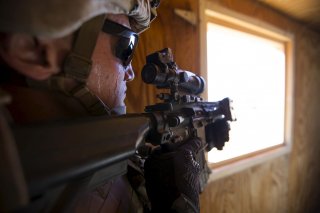 Even as the United States Marine Corps continues to field the M27 infantry automatic rifles, the Corps has put the U.S. Army’s Next Generation Squad Weapon (NGSW) in the crosshairs, Military.com reported. However, it isn’t as simple as adopting the new weapon that the Army is using, because the Army hasn’t actually determined what will be the NGSW.

The experimental 6.8mm NGSW is still in its final phase of testing, but the Army has narrowed down the selection process to three very unique firearms. Each of the weapons being considered have starkly different designs, but notably each will be chambered for the new 6.8mm round, which was developed to be more lethal than the currently used 5.56mm NATO ammunition. It is designed to penetrate modern enemy body armor at ranges well beyond the current 5.56 enhanced performance round.

Whichever one is ultimately chosen will replace the Army’s M249 squad automatic weapon (SAW) and the M4A1 carbine. The rifle/auto-rifle variants are scheduled to begin adoption in fiscal 2023.The Marine Corps’ decision to adopt the same weapon as the Army makes sense, especially as the Marine Corps Systems Command’s (MCSC’s) Program Manager for Infantry Weapons has begun a large-scale modernization project to increase the lethality of the infantry squad.

This has included expanding the use of the M27 Infantry Automatic Rifle (IAR), which was originally fielded to infantry units as a replacement for the M249 SAW in 2011. The M27, which is a lightweight, air-cooled, gas piston operated, shoulder-fired weapon used primarily as an alternative to heavier belt-fed SAWs, has received overwhelmingly positive feedback from Marines.

However, the M27, which was developed by German-based Heckler & Koch and first fielded in 2011, hasn’t been universally adopted across the Corps. Instead the USMC is collaborating with other services to field certain systems, and this includes the Army’s NGSW, which it could replace as the M27 as the primary personal weapon for infantry units.

The weapon is noted for the inclusion of an optic/fire control system that will incorporate a distributed reticle to improve the shooter’s accuracy, and that could provide a significant boost to the lethality of the individual soldier and Marine.

“This is the largest modernization of the infantry squad in the last 25 years,” said Lt. Col. Tim Hough, MCSC’s program manager for Infantry Weapons.

The Marine Corps could receive first delivers of the NGSW as early as fiscal year 2025. But that may not mean the end of the line entirely for the M27 and the Corps. Military.com reported that if a decision is made to procure the NGSW, the Marines Corps will evaluate reissue of the M27 from infantry units to other Fleet Marine Force units.

According to Task & Purpose roughly 567 soldiers and Marines have contributed 7,658 hours of testing to the NGSW.