The Marine Corps Loves the V-22 Osprey—But Does It Have Enough? 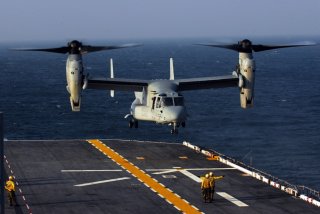 The Navy is making a new effort to preserve, upgrade and maintain its fleet of Bell Boeing V-22 Osprey tiltrotor aircraft, platforms which have consistently been in high demand from Marine Corps commanders for many years. Corps leaders have consistently sought greater numbers of Osprey for a wide range of missions and deployments. But for many years now, the Corps has been concerned that the high demand for Osprey has made it difficult to sustain and modernize the fleet.

While the need for Osprey maintenance was identified years ago, the Pentagon just announced a new contract modification to extend a key program that has been underway for several years. The Navy deal for the Osprey with Bell-Boeing cites the continuation of a key maintenance program for the aircraft begun several years ago called the Common Configuration, Readiness, and Modernization (CC-RAM) Plan. The multi-year effort is, among other things, intended to improve readiness rates and service life for the Navy and Marine Corps Ospreys. CC-RAM has been underway for many years now and involves improvements to the Osprey’s Multi-Spectral Sensor, computer system, infra-red suppressor technology, generators and landing gear control units, the aviation plan specifies.

While initially designed and built years ago, the Osprey airframes remain viable and highly functional, and the aircraft has received a number of key upgrades in recent years. Improvements to the Osprey include configuring variants of the helicopter as refuelers for other aircraft such as the Lockheed Martin F-35 Lightning II stealth fighter jet as well as improved digital networking, communications, and the possibility of new weapons.

The idea with CC-RAM is to maintain and improve upon the many characteristics of tiltrotor technology which include an ability to fly at airplane speeds yet also hover and maneuver like a helicopter. The speed and hovering ability are among the characteristics being refined, expanded, and improved through the sustainment program. Upgraded Ospreys will also operate with improved cargo and payload capacity, survivability system, and a new generation of avionics.

The high demand for Ospreys indicates that the multi-role functionality of the aircraft is adding unique operational value. Not only does an Osprey offer considerable ranges such as a 450 nautical mile combat radius, but it can also transport Marines, weapons, and high-value cargo for great distances over land and maritime environments. It operates with the range of many fixed-wing aircraft while adding an ability to maneuver and land in austere, forward environments without needing a runway.  Ospreys could be critical to any amphibious assault as they could deliver reinforcements of Marines quickly once forces had established a beachhead area. They can also resupply forward forces with weapons, ammunition, and other crucial supplies.