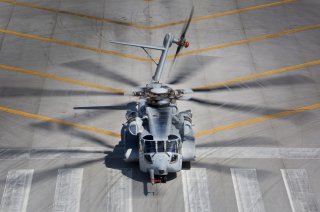 The King Stallion will form the backbone of Marine and Navy heavy-lift operations. It is faster, lighter, and more robust, all while having three times the capacity of its predecessor.

A Navy press release said that the King Stallion is “the most powerful helicopter in the Department of Defense.” It also said that “the CH-53K is a new-build helicopter that will expand the fleet’s ability to move more material, more rapidly throughout the area of responsibility using proven and mature technologies.”

One month ago, the Marine Corps stood up Marine Heavy Helicopter Squadron (HMH) 461, the first unit to receive the new CH-53K King Stallion. Pilots from that unit had previously flown the CH-53E Super Stallion, the King Stallion’s predecessor.

The King Stallion’s internal cargo bay has been expanded by twelve inches and can accept a broader range of payload and payload arrangements. Despite the size increase, the King Stallion has an equivalent logistics footprint, requires less maintenance, and benefits from lower operating costs than the Super Stallion.

The design benefits from several other improvements, including efficient fourth-generation composite rotor blades. Pilots are aided by an entire glass cockpit, easing flight load. King Stallion mechanics also benefit from components that are lower maintenance than the Super Stallion.

The King Stallion’s advantages over the Super Stallion are significant, which is one of the reasons why the Marine Corps would ultimately like to acquire two hundred King Stallions. Though the timeline for when the first helicopters will enter into service is somewhat unclear, it should be before the end of this year.