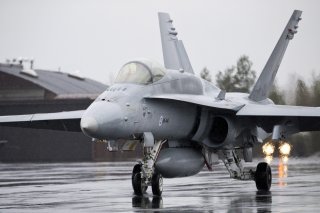 Delivery was expected to be completed by May 2022.

Raytheon had already been selected to fit the AESA system to ninety-eight of the Corps' F/A-18C/D aircraft replacing the AN/APG-73 mechanically scanned radar, which was also made by Raytheon.

The APG-79(v)4 is a scaled back version of the APG-79 AESA system, and it provides active electronic beam scanning, which according to Raytheon allows the radar beam to be steered at nearly the speed of light, and this provides for greater situational awareness while providing superior air-to-air and air-to-surface capability. The agile beam further enables the multimode radar to interleave in near-real-time, meaning that the pilot and crew can use modes simultaneously.

"With AESA radars, fighter jet pilots and crews tip the scales in their favor over their adversaries," said Eric Ditmars, vice president of Raytheon Secure Sensor Solutions. "Now that the APG-79(v)4 is slated to fly on the classic Hornet, Marine Corps pilots will be able to identify, track and engage more targets over a greater distance than ever before."

It provides crews with improved radar reliability, reduce maintenance hours – while the new APG-79(v)4 shares more than 90 percent commonality with the APG-79, which should help with global sustainment and the existing upgrade path. The APG-79 system is already in full production for the U.S. Navy and Royal Australian Air Force.

Raytheon isn't the only game in town, however, for active electronically scanned arrays. Northrop Grumman has also secured a contract modification for engineering and manufacturing development work for fifteen active AESA radars designed for the U.S. Air Force's F-16 fleet.

In January, Northrop Grumman had completed the installation of its AN/APG-83 SABR radars on Air National Guard F-16s at Joint Base Andrews, Maryland. This radar upgrade will extend the operational viability and reliability of the F-16s while providing pilots with fifth-generation fighter radar capabilities.

With its greater bandwidth, speed and agility, the APG-83 enables an F-16 to better detect, track and identify a greater number of targets faster and at longer ranges. It also features all-weather, high-resolution synthetic aperture radar mapping, which provides a pilot with a larger surface image for more precise target identification and strike compared to legacy radar systems.

"The APG-83 radar provides unprecedented, active electronically scanned array (AESA) targeting and fire control capabilities to the F-16 fleet to ensure the superior effectiveness of the Air National Guard's mission," said Mark Rossi, director, SABR programs, Northrop Grumman. "APG-83 was specifically designed to maximize the performance of the F-16 with an affordable and scalable architecture, based upon advancements made through the introduction of Northrop Grumman’s APG-77 AESA for the F-22 Raptor and APG-81 AESA for the F-35 Lightning II."