The Marines Begin Training With the New Amphibious Combat Vehicle 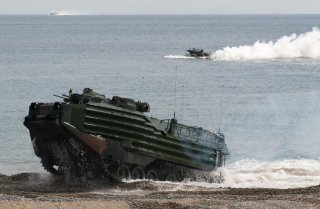 During the recently concluded Iron Fist 22 bilateral exercises, units of the U.S. Marine Corps conducted ship-to-shore operational training with the amphibious combat vehicle (ACV). As part of the exercises, members of the 1st Marine Division operated from USS Anchorage, a San Antonio-class amphibious dock ship, in the Pacific Ocean.

The marines worked alongside the crew of the Anchorage to successfully demonstrate the ACV’s ability to launch and recover from the well deck.

"This underway period is a true testament of the rigorous training our Sailors and Marines are doing to prepare for ACV waterborne operations," said Rear Adm. Wayne Baze, commander of Expeditionary Strike Group 3. "They spend countless hours preparing, which is evident in the professional manner in which they conducted themselves throughout this evolution. I could not be more proud of each and every one of them."

Amphibious operations, which include the use of amphibious ship-to-shore connectors such as the ACV, are a foundational aspect of Marine Corps operations and are critical to the future force and its ability to remain the U.S. military's premier expeditionary force.

"The amphibious combat vehicle, combined with L-class ships and the light amphibious warship are critical programs that afford us the ability to move forces around," explained Gen. David Berger, Commandant of the Marine Corps. "The Marine Corps' role is a forward force. This organic mobility is crucial to operate as a forward deployed, stand-in force."

During the Iron Fist exercise, marines with the 3rd Amphibious Assault Battalion worked alongside Japan Ground Self Defense-Force (JGSDF) soldiers from the 2nd Amphibious Rapid Deployment Regiment and conducted bilateral training using Marine Corps ACVs and JGSDF assault amphibious vehicles. Over the course of the training evolution, the ACV was run through an amphibious basic skills package that included day and night training as well as a series of amphibious assaults.

The 1st Marine Division is the oldest, largest, and most decorated division in the U.S. Marine Corps. Headquartered at Camp Pendleton, California, the unit is a combat-ready force of more than 22,000 marines and sailors. The division is prepared to deploy as a scalable ground combat element structured to defeat peer, near-peer, and hybrid threats across the range of military operations.

The amphibious combat vehicle is an eight-wheel drive armored vehicle developed by BAE Systems. It can provide open-ocean capabilities and land mobility. It is being introduced to replace the Marine Corps' Cold War-era Assault Amphibious Vehicle (AAV), which has been in service for nearly half a century. The Marine Corps has sought to acquire four ACV variants: a personnel squad maneuver variant that can carry a total of thirteen marines and three crew members; a command-and-control variant for ACV commanders; a recovery and maintenance variant; and a 30-millimeter gun variant that can offer marines fire support.

While the ACV is an improvement over the older AAV, a recent report from the Congressional Research Service on the ACV outlined some of the platform's shortcomings. These include cramped interior space and seats that weren't properly designed for body armor. In addition, there have been failures with the Remote Weapon System that controls the exterior-mounted MK19 automatic grenade launcher or M2 .50 caliber heavy machine gun.

The ACV is undoubtedly an improvement on the legacy AAVs, but several kinks still need to be worked out. Training exercises like Iron Fist can help ensure that it can safely and effectively bring marines to shore.