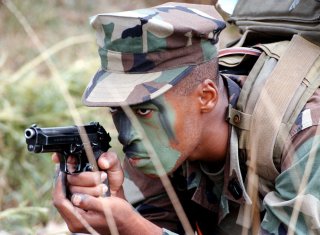 As part of the Marine Corps Systems Command’s (MCSC’s) Program Manager for Infantry Weapons large-scale modernization project to increase the lethality of the infantry squad, the Corps has begun the procurement of the Modular Handgun System (MHS) to replace all of its current pistols.

This striker-fired pistol—the M18 service pistol is a compact variant of the striker-fired M17 based on the Sig Sauer P320—features a plastic clip-on piece, which enables Marines to change grip sizes to accommodate different hand sizes. The weapon is also compatible with the pistol-aiming module used by some units.

The M18 is a 9mm pistol that featured a coyote-tan PVD coated stainless steel slide with back controls. The handgun is equipped with SIGLITE front night sights and removable night sight rear plate and manual safety.

MCSC will begin fielding the system this fiscal year.

“The MHS improves on the precision and reliability of the legacy platforms, while also bringing with it new, more effective ammunition,” said Maj. Mike Brisker, weapons product manager for PM IW.

The M18 will replace the Beretta M9, which has been the standard sidearm of the Corps since it was adopted in 1985. The Sig Sauer produced M18 will also replace the selectively-fired Glock 9mm M007 concealed carry as well as the M45A1.

It has been a slow transition, and one that will still take a few more years to complete. The Marines began eyeing the Army’s new pistol in 2018, and laid out plans to purchase 35,000 of the handguns in the 2019 budget request according to Task and Purpose. The service did end up purchasing some 30,306 M18s, and has began to issue the weapon in February 2019 when Sig Sauer delivered the first batch of 5,000 pistols to the Army, Air Force, Navy and Marines Corps for training, demonstration and evaluation.

MilitaryTimes reported that the M18 successfully completed a MHS material reliability test that consisted of firing three M18 pistols to 12,000 rounds each for a total of 36,000 rounds in accordance with MHS requirements. Comparatively, the U.S. Army’s M9 was only tested to 5,000 rounds. In the testing, the M18 experienced zero stoppages despite being allowed up to a dozen stoppages. Additionally, the M18 passed a parts interchange test, and it also met stringent accuracy and dispersion requirements.

The Air Force and Navy have each announced plans to purchase 130,000 and 60,000 M18 pistols respectively in the coming years. The Army has also announced that it will buy approximately 195,000 MHS pistols—but the majority of those will be the M17 version.

Sig Sauer had beat out Glock Inc., FN America and Beretta in the MHS completion, which the Army launched in late August 2015 to replace the M9.