Maryland Coronavirus Lockdown Protester: 'Our Governor Is Literally Ignoring Us' 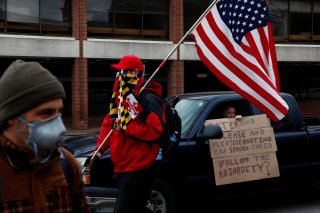 Protesters with the organization Reopen Maryland say they see the frustration of fellow Marylanders as their state experiences the economic effects of the coronavirus lockdown.

“We are seeing a lot as we do these rallies and protests; we’re seeing more and more people are frustrated,” Evie Harris, a co-organizer for Reopen Maryland, said Monday in an interview with The Daily Signal.

Much of that frustration, Harris said, is directed at Gov. Larry Hogan, a Republican in his second term heading the Democrat-dominated state.

“We believe our governor is literally ignoring us,” she said, citing a “bubbling” frustration also reflected on the group’s Facebook page.

“Not only is that inexcusable for an elected official,” Harris said, “but there’s also dehumanizing because it downplays or disregards the utter devastation that these families and businesses are going through.”

Reopen Maryland, which calls itself “a group of individuals concerned about the impact of Maryland’s mass shutdowns and school closures in response to COVID-19,” held a cross-state road rally Saturday to protest Hogan’s extension of the Free State’s shutdown to May 10.

Residents in about 250 cars participated in the Frederick area, Harris said, and reporting indicated that another 300 persons participated on foot.

Evie Harris, who is not related to the congressman, said Reopen Maryland announced Saturday that it had joined with 17 other plaintiffs in a complaint filed in U.S. District Court for the District of Maryland.

“The suit basically alleges that the government’s executive orders violate our rights, they violate our civil and constitutional rights, and so we are petitioning the court to have our case heard,” she said.

Over 234,000 people filed for unemployment in Maryland from March 15 through April 3, The Baltimore Sun reported.

Evie Harris said it is critical that Hogan and other officials realize that the situation has been devastating for Marylanders.

“I think it is so important that, … behind the numbers, that these are real human beings who have been forced through no fault of their own into unemployment, into poverty by our government,” she said.

She expressed particular frustration with how Hogan has handled the pandemic.

“Our governor continuously goes on prime-time shows and he will make the statement … that he’s a lifelong small business person. And so he feels the frustration. Well, we don’t get any of that,” Harris said, adding:

We don’t get a sense [of that] from the governor. We do not. Our members want to reopen Maryland. … I’m hearing reports that [on] the unemployment website over the weekend, some people were able to get through. But up until that time, many Marylanders have been shut out of that unemployment system.

The Daily Signal emailed Hogan’s communications director for comment, but did not receive a response by publication time.

In an appearance Sunday on Fox News Channel, Hogan said: “Nothing matters to me more than getting our economy back on track, but we want to make sure we do so in a safe way.”

“We are adults, and we are able to modulate and moderate ourselves,” Harris said, adding:

We advocate and advise people to stay within the guidelines. So we tell people, you know, if you go into an establishment, if you leave a vehicle to go into an establishment … wear your mask. If you’re outside in the public, you don’t have to wear your mask. If you are going to congregate where there are more than 10 people, or you’re just too close, put your mask on. We advocate that. [We advise] people to stay in your cars unless there is some need or necessity for you to exit your vehicle.

Reopen Maryland isn’t an organization, she said, but a movement:

We started with … just a group of people putting a page up on Facebook to get people’s comments and expressions of how they were feeling. And we are literally grassroots. We are nonpartisan, and we advocate for our constitutional rights to freedom of religion, freedom to assemble, and to have our grievances addressed by our government

This article by Rachel del Guidice first appeared in The Daily Signal on May 4, 2020.

Image: Protestors drive and honk their car horns outside of the State House during a demonstration calling for the re-opening of the state of Maryland amidst the coronavirus disease (COVID-19) outbreak, in Annapolis, Maryland, U.S., April 18, 2020. REUTERS/Tom Brenner.