Mass Exodus: How Washington Became a Ghost Town Haunted By a Pandemic 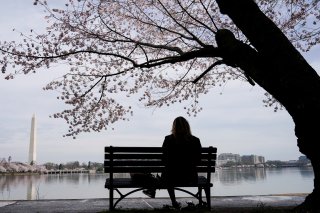 On my last day in Washington, the train was mostly empty. Some commuters wore medical masks. One man donned a gas mask. He’d been wearing it for days. The train dropped us off at Union Station, which, for me, has always served as the doorway between one life and the next, the one that swings back and forth between the gritty beauty of Baltimore and the pink-tie bravado of Washington. It was always a busy space, bustling with tourists. On a daily basis, I was pushed aside by one inconsiderate person or another who had become frustrated with the size of the crowd. Once, when I tried to bypass the crowd exiting the train and rushing into the station by going through the exit door, the man exiting that door with a duffel bag tightened his grip on the bag and then punched me in the stomach. This time it was different. Union Station’s marble floors and limestone walls captured only the echoes of a reduced number of footsteps. Society was spooked. People were dying after being exposed to a deadly virus. Overseas, hospitals were hemorrhaging resources under the weight of intense duress from an onslaught of medical cases. In America, doctors and nurses were preparing to do the same.

The country had gone to war. Its citizens were fighting an invisible enemy. Some of them were hiding from it, hoping to avoid its wrath. Others were doing their best impression of Paul Revere riding his horse in a frenzied panic to warn people against a pending attack launched by British troops.

For some people, social distancing was sitting at home alone with a bag of potato chips. For me, social distancing meant maintaining the boundaries of my personal space, which is something I typically tried to do anyway. The tit-for-tat of “you're endangering society” and “you’re overreacting” was insufferable.

And under those circumstances, the invisible enemy was winning. It was dividing the country. It was sowing discord and dissent. Quietly. Slowly. In gentle waves that gained momentum over time. First, the bottles of hand sanitizers started disappearing, then the hand soap, then the toilet paper, then the meat, the milk, the vegetables, then everything else until people were picking through the leftovers and making peace with whatever they could find.

Many of the elderly folks avoided the initial waves of panic. They couldn’t afford to get swept up in a crowd of people who could be carrying a virus that was most deadly to individuals with compromised immune systems and a history of health issues. So they waited. And when the stores were less crowded, they went to see what could be salvaged. Maybe some dried fruit. Maybe some bread. They slowly roamed the partially barren aisles with their shopping carts as if they’d been left behind.

The restaurants and bars were also victims of the waves of panic. They were still open for business after the president gave his Oval Office address on March 11. They were still serving customers after the schools began to close. They remained open until government officials ordered them to shut their doors and offer only delivery or takeout services.

There is a feeling, sometimes toward the end of relationships, sometimes when you know you’re about to get laid off, that the end is on the horizon. So you try to slow it down. Denial. Lying to yourself. And even when you’re hearing the words you never wanted to hear but knew you’d hear, you’re still trying to stop them from escaping from your worst dreams and solidifying into reality. They present themselves in slow motion because you tell yourself that if you can slow them down, then you can stop them.

Only you can’t stop anything because you’re powerless.

I took the bus to work from Union Station that day. It seemed safer than the metro and it was still cheaper for me to get to work via bus. So, that’s what I did. I looked out the window, as always. I saw fewer people. I saw less traffic. I saw my recurring nightmares about the end of the world coming to life. Maybe I’d gotten stuck in one of the dreams, I told myself. Maybe I never woke up. The bus passed by the intersection of 15th Street and K Street where an elderly man sits on the corner with his cane every day. Every day. He’s been doing it for years. He shouts the same thing at anyone who passes him by: “Good morning! GOOD morning!” He never asks for money although it’s implied that he would like a little spare change or perhaps some food. He never asks for anything. He just shouts “good morning” at people and if they respond politely, especially if it’s a female who responds to his greeting, he says, “Just look at that pretty smile. LOOK at that pretty smile.”

That day, on my last day in Washington, he was shouting “good morning” over and over again only no one was responding to his greeting because there was no one around to respond.