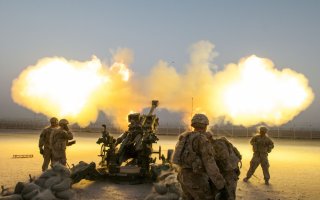 The Commander of Air Force Global Strike Command thinks that the Army’s Long-range Precision Fires project is not just plain stupid, but also a waste of time and resources that could be put to better use elsewhere.

In comments made to the Aerospace Advantage podcast, Air Force General Timothy M. Ray said that he “genuinely struggle[s] with the credibility of that plan,” referring to the Army’s Long-range Precision Fires project which aims to provide the Army with a long-range, surface-to-surface missile with a range of more than 300 kilometers, or nearly 190 miles.

In some ways, the Army would like to supplant some of the other branches’ traditional roles by becoming a so-called multi-domain force that can operate not only on land, but also play a role at sea, in cyberspace, and in space. Gen. Ray firmly stated that in his opinion it would be a “stupid idea to go invest that kind of money to recreate” capabilities that the Air Force is already proficient in. “I kind of get it in Europe, but I completely don’t get it in the Pacific,” Ray stated emphatically.

Once fully mature, a ground-based missile would require significant deployment time, and might not be able to respond to threats in a timely manner, even if the Long-range Precision Fires project ultimately yields a viable hypersonic missile.

The Air Force on the other hand can not only bring long-range missiles to a fight quickly, they already have done much of the research and development work on hypersonics and are already putting their hypersonic missile prototypes through their paces.

One Air Force project, the AGM-183A hypersonic missile (also known as ARRW, or Air-launched Rapid Response Weapon), is expected to take to the skies any day now. The program is far enough along that the B-1B Lancer bomber is being considered as a delivery platform for the ARRW, a move that could breathe new life into an admittedly old, Cold War-era strategic bomber.

The AMG-183A would initially be carried by an even older bomber, the B-52, and could eventually equip the F-15 Eagle, offering a mix of slower but high-capacity and fast but low-capacity options for battlefield commanders.

It remains to be seen if the Army’s new strategy will ultimately provide Army leadership with new capabilities or if it will come to naught. General Ray however isn’t convinced it’s worth either the time or the effort. The Air Force can be there in “hours — not days, months, or weeks,” and can remain in-theater “for more extended periods of time, and [have] the ability to keep up the operational pace.” In short: “it’s stupid…gimme me a break.”