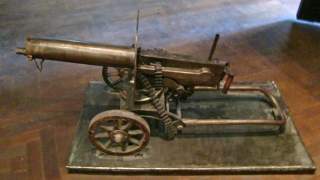 During the early morning of Oct. 25, 1893, a column of 700 soldiers from the British South African Police camped in a defensive position next to the Shangani River.

While they slept, the Matabele king Lobengula ordered an attack on the column, sending a force of up to 6,000 men—some armed with spears, but many with Martini-Henry rifles.

Among its weapons, the column possessed several Maxim machine guns. Once a bugler sounded the alert, the Maxims spun into action—and the results were horrific.

The Maxim gunners mowed down more than 1,600 of the attacking Matabele tribesman. As for the British column, it suffered four casualties.

The British military not only measured the Maxim gun’s success by the number of Matabele killed in action. They could gauge the Maxim’s potential as a weapon of psychological warfare.

In the aftermath, several Matabele war leaders committed suicide either by hanging themselves or throwing themselves on their spears. That is how Earth-shattering a weapon the Maxim gun was.

“The round numbers are suspicious,” C.J. Chivers wrote in The Gun, his history of automatic weapons. “But the larger point is unmistakable. A few hundred men with a few Maxims had subdued a king and his army, and destroyed the enemy’s ranks. Hiram Maxim’s business was secure.”

Maxim’s invention brought industrial-strength killing to the battlefield. More than any other weapon developed in the late 19th or early 20th Century, the Maxim gun is responsible for changing the nature of warfare forever.

The British square and “the thin red line” of massed infantry firepower eventually went the way of the dodo. When the Maxim gun opened fire at 500 rounds per minute, the tactic of soldiers firing in ranks became suicidal.

From then on, an infantryman would have to dash and weave, relying on his ability to maneuver to bring fire to bear on the enemy … and to stay alive.

The Maxim gun’s history has two chapters. The first is when it was the weapon of choice to help expand the British Empire during the late 19th century. The devastation the weapon wrought during World War I is chapter two.

But to really understand the weapon, you have know something about the inventor—an American who was both an inveterate genius and a shrewd businessman.

Tinkering came naturally to Maxim, who was born in Maine in 1840. While still a teenager, he literally built the better mousetrap—his trap automatically reset and rid local mills of rodents. At 26, he patented a curling iron, the first of 271 patents in his name.

But he wanted fame and fortune. Particularly fortune. He went to Europe.

“In 1882, I was in Vienna, where I met an American whom I had known in the States,” Maxim wrote in his memoir. “He said, ‘Hang your chemistry and electricity! If you want to make a pile of money, invent something that will enable these Europeans to cut each others’ throats with greater facility.’”

Sound advice. In 1884, he harnessed the recoil of a bullet with a spring-loaded bolt mechanism and feeding device that drew ammunition into the gun on a cloth belt. The Gatling or Nordenfelt rapid-firing guns of the time were hand-cranked, gravity-fed weapons with multiple barrels that were prone to jamming.

Maxim also invented a cleaner-burning, smokeless powder that he called cordite, which fouled a weapon much less than the black powder of the era.

The combination of mechanized automatic fire and cleaner ammunition was revolutionary. By 1889, the British Army had adopted the Maxim gun. A year later, the armies of Austria, Germany, Italy and Russia all had Maxims.

The quintessential incarnation of the Maxim gun came when the inventor partnered with the British Vickers Co. The result was a water-cooled, tripod-mounted machine gun in .303-caliber, fed by ammunition on a 250-round belt.

It came just in time for World War I. But it was one thing to gun down “the savages.” Many generals and military planners doubted the effectiveness of the Maxim gun—as well as similar machine guns—against troops of Western European powers.

They still preached the bayonet charge. “The spirit of the bayonet must be inculcated into all ranks,” one infantry manual stated, “so that they go forward with aggressive determination and confidence of superiority born of continued practice, without which a bayonet charge will not be effective.”

Not even the evidence of the 1904 Russo-Japanese War, with its long sieges and trench warfare—an eerie predictor of World War I’s horrors to come—could persuade military observers of the Maxim gun’s lethality on the modern battlefield.

“The observers watched Russian and Japanese being mowed down in swathes by machine-gun fire and returned home to write [that] the machine gun is a vastly overrated weapon; it appears highly doubtful that it would be effective against trained European soldiery,” James Stokesbury wrote in A Short History of World War I. “Apparently, they did not consider Japanese, or even Russians, to be in that supposedly elite category.”

The reality on the Western Front was something quite different. Some called World War I “the machine gun war”—although artillery fire often caused the bulk of the casualties, soldiers vividly recounted watching their comrades drop like flies as machine guns traversed their ranks while firing.

In just one day during the Battle of the Somme on July 1, 1916, the British lost 21,000 men, the great majority killed by Spandau machine guns, the German version of the Maxim.

Maxim, wealthy, famous and knighted by the queen, died on Nov. 24 the same year—in London, his home after he became a naturalized British subject.

A few weeks before, the Battle of the Somme had ended. The result was more than a million casualties, many from machine-gun fire.