Maximum Pressure: Two Words That Could Start a War with Iran 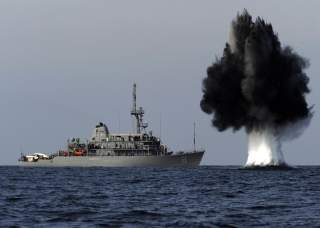 President Trump has said he does not want war with Iran, but that his main objective is to prevent Tehran from getting a nuclear weapon. On the advice of National Security Advisor John Bolton, the administration has pursued that goal using  “maximum pressure,” a tactic which thus far has consistently failed. Bolton’s preferred strategy has pushed Iran closer to the bomb, incentivized menacing behavior, and increased the chance of war. If we are to check this deteriorating situation before it’s too late, a new, realistic strategy is necessary now.

Fortunately, Iranian President Hassan Rouhani is willing to work with Washington if such a pivot materializes. Iran, he said Wednesday, is "completely ready for just, legal and honest negotiations" for a new nuclear deal.  "But at the same time," he added, Iran is "not ready to sit at the table of surrender under the name of negotiations." This is precisely why maximum pressure doesn't work: It issues demands to Tehran but offers no benefits. Thus trying to force Iran to capitulate on all points and surrender national sovereignty virtually assures our interests continue to suffer and that the risk of war remains pointlessly high.

Moving to a more viable strategy does not require pretending the regime in Tehran is anything but a repressive, troublesome regional actor. It does require viewing the situation in a sober and realistic way. That means recognizing the best route to preserving American interests lies in first deterring Iran and second in using diplomacy to craft an agreement both sides can accept. We must not sacrifice the adequate achievable by seeking the perfect unobtainable.

Defenders of maximum pressure have to reconcile this painful fact: Prior to U.S. exit of the nuclear deal, Iran was in complete compliance with the agreement's terms and was not engaging in the openly provocative acts we've seen in recent weeks. Washington's departure also has unnecessarily strained relations with our allies (all of whom want to do business with Iran) while giving Tehran an excuse to increase the purity and quantity of its nuclear materials and take one destabilizing action after another in the Gulf.

These menacing acts have typically come as an overt tit-for-tat retaliation to U.S. moves or had as their avowed purpose encouraging the West to return to the provisions of the previous nuclear agreement. There is no evidence Iran wants to leave the deal to pursue a nuclear weapons program. In fact, the opposite is true.

Washington’s goal should be to resolve this matter with diplomacy.  Negotiations won’t be easy, but neither are they impossible.

The centerpiece of maximum pressure is sanctions, which have ravaged the Iranian economy and caused civilian suffering while utterly failing to produce the desired change in regime behavior. These sanctions have offered no valid ”off-ramp" whereby, if the regime complies, this economic pain can be reduced or eliminated. Instead of convincing Tehran to come to the negotiating table, such sanctions-without-end are pushing all parties closer to war.  Washington should, therefore, begin by offering to lift some restrictions on selling oil to our allies as an act of good faith while we work to find more permanent solutions that work for everyone.

The objective is not to change the Iranian regime but to foster regional conditions that benefit the United States. As Rouhani said this week, the Iranian leadership is willing to negotiate a new deal, even potentially including limits on ballistic missiles. Pursuing an agreement like that serves U.S. interests, but Washington must recognize it won’t get a deal that imposes more constraints on Iran than the old agreement unless it is willing to give Iran more than was offered before. The right tradeoff could be a huge security win for America and our regional allies.

The U.S. can afford to explore these options because Iran is a weak power that poses no direct threat to us. We cannot afford to risk another costly, prolonged conflict in the Middle East. Hossein Dehghan, senior advisor to Iran’s Supreme Leader, on Wednesday told Al Jazeera that in the event of war with the United States, Iran, and its proxies would target all U.S. bases in the Middle East. Maybe that's a bluff, but it would be the height of folly to fight another unnecessary war to find out.

America has successfully deterred Iran for over four decades and, if necessary, we can continue that deterrence indefinitely. While continuing maximum pressure may well tumble us into a catastrophic war, diplomacy and a sober-minded willingness to negotiate an adequate new deal can assure our interests in the region for decades to come.