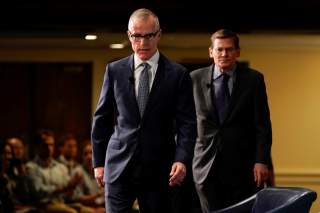 Former FBI Deputy Director Andrew McCabe apologized to an FBI investigator after changing his story regarding a leak to the media in October 2016, according to documents released Tuesday.

McCabe was interviewed May 9, 2017, the same day James Comey was fired as FBI director, regarding two separate leaks to the media. During the interview, FBI agents also asked McCabe whether he knew how FBI information wound up in an Oct. 23, 2016, Wall Street Journal article about an investigation of the Clinton Foundation.

McCabe said during that sit-down he did not know how the Journal story came about, but he changed his story in an interview several months later, an FBI agent told investigators with the Justice Department’s inspector general (IG). The IG later determined McCabe directed his general counsel, Lisa Page, to share information with a Journal reporter regarding the Clinton Foundation investigation.

McCabe admitted his role in authorizing the leaks during an interview with FBI agents Aug. 15, 2017, according to the documents, which were obtained by the liberal watchdog group, Citizens for Ethics and Responsibility in Washington.

“And as nice as could be, he said, yep. Yep I did,” the FBI agent said of McCabe, according to the documents, which The Daily Beast first reported.

The agent said the tone of the interview changed after McCabe’s admission.

The agent said he told McCabe his misleading statements “caused us some kind of, you know, sidetracking here now with some information other people have told us.”

“I remember saying to him … sir, you understand that we’ve put a lot of work into this based on what you told us,” the agent said, according to a transcript of the interview.

“I mean, and I even said, long nights and weekends working on this, trying to find out who amongst your ranks of trusted people would, would do something like that. And he kind of just looked down, kind of nodded, and said yeah I’m sorry.”

McCabe was fired from the FBI on March 16, 2018, after the FBI’s Office of Professional Responsibility and Justice Department inspector general determined that he displayed a lack of candor in four interviews regarding his role in authorizing the leak to the Journal.

McCabe, who is a CNN analyst, since sued the FBI and Justice Department over his firing. He is also reportedly the target of a criminal investigation for possibly making false statements to law enforcement.

His lawyers said McCabe gave inaccurate answers in his interviews with the IG because of the chaos surrounding Comey’s firing. He has denied intentionally making false statements about his role in the media leaks.

McCabe’s legal team did not respond to a request for comment.