McCabe To Speak at NYU—But Will He Address Carter Page? 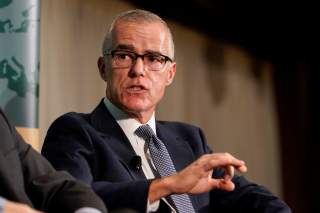 Former FBI Deputy Director Andrew McCabe and Andrew Weissmann, one of the lead prosecutors in the special counsel’s probe, will speak at a New York University event Thursday about reforms to the Foreign Intelligence Surveillance Act (FISA).

The event, called “Reforming the FISA Process: Proposals for the Future,” will address a report from the Justice Department’s office of the inspector general (IG), which found that the FBI made “significant” errors and omissions in its applications for FISA warrants against former Trump campaign aide Carter Page.

McCabe had a front-row seat to the FISA failures that will be discussed at the event.

He was the second-in-charge at the FBI when the bureau submitted false information to the FISA court in order to wiretap Page. He signed off on the third FISA renewal, dated June 29, 2017, when he served as acting director of the FBI.

McCabe was also briefed regularly on Crossfire Hurricane, the code name for the FBI’s counterintelligence investigation of the Trump campaign.

McCabe, Weissmann, Cato Institute senior fellow Julian Sanchez and Liza Goitein, an executive at the Brennan Center for Justice, will make up an “expert panel to diagnose the problems and foster ideas for solutions.”

The IG found that the FBI failed to disclose information that undermined the theory that Page was a Russian agent, as well as information that called dossier author Christopher Steele’s reliability into question.

Steele’s dossier, which was funded by Democrats, was “central and essential” to the FBI’s decision to seek the FISA warrants, the IG report said.

But the report criticized the FBI for failing to tell the FISA Court about information that called Steele’s dossier allegations into question. The most glaring example from the report is that Steele’s primary source told FBI agents in January 2017 that the ex-spy embellished or misrepresented information in the dossier, including about Page.

The information was never disclosed to the FISA Court.

The IG report said McCabe was one of the FBI officials who lobbied the intelligence community to include the dossier in an Intelligence Community Assessment laying out evidence that Russia meddled in the 2016 election. The report said CIA analysts disagreed with McCabe because they felt the dossier was “Internet rumor.”

McCabe also told the IG he “felt strongly” that the FBI should pursue a FISA warrant against Page.

McCabe was fired from the FBI on March 16, 2018, for displaying a lack of candor to investigators regarding his authorization of a leak to the media in October 2016 for a story about the Clinton Foundation.

McCabe initially touted the IG’s findings as vindicating the FBI.

But McCabe changed his tune a week later, after Judge Rosemary Collyer, who presided over the FISA Court, blasted the FBI for submitting “false” and “misleading” statements in order to obtain warrants to wiretap Page.

“Shocked because we all believed, I certainly believed that the procedures we had in place were enough to guarantee that accurate information was going to the court and horrified because it cuts against one of our most fundamental duties and that is to be perfectly accurate and truthful and complete with the court at all times,” he said.

Weissmann was not involved in the process to seek a FISA on Carter Page, though he did meet with the FBI’s Crossfire Hurricane team in the weeks before the 2016 election. On the special counsel’s team, Mueller led the prosecution of former Trump campaign chairman Paul Manafort. He earned the nickname of “Mueller’s pit bull” because of his reputation for his aggressive prosecutorial tactics.

Weissmann is an analyst at MSNBC, and senior fellow at the NYU School of Law.

NYU’s Reiss Center on Law and Security, which is hosting the event, did not respond to a request for comment about McCabe.