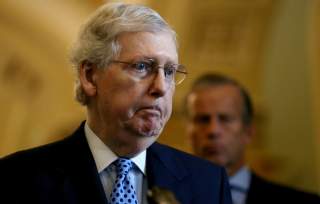 McConnell elicited sharp criticism from Democrats in May, when he first signaled that he would fill a 2020 vacancy despite his year-long blockade of Garland’s nomination to succeed the late Justice Antonin Scalia. Tuesday’s remarks indicate the leader was undeterred by the controversy.

Senate Majority Leader Mitch McConnell said Senate Republicans will fill a vacancy on the Supreme Court should one arise in 2020, and rejected suggestions that such an occurrence would be at odds with his approach to Judge Merrick Garland’s nomination in 2016.

“You have to go back to 1880s to find the last time a Senate of a different party from the president filled a Supreme Court vacancy created in the middle of a presidential election,” McConnell said. “That was entirely the precedent. That was confirmed again by Joe Biden in ’92, by Harry Reid and Chuck Schumer in 2007. There were not vacancies existing at the time, but that was the time when the other party controlled the Senate. There was a Republican in the White House. They were quite forthcoming.”

“Under the Constitution, there is co-responsibility for appointments,” the leader added.

McConnell elicited sharp criticism from Democrats in May, when he first signaled that he would fill a 2020 vacancy despite his year-long blockade of Garland’s nomination to succeed the late Justice Antonin Scalia. Tuesday’s remarks indicate the leader was undeterred by the controversy.

Elsewhere in the interview, McConnell said filing judicial vacancies is a top priority for Senate Republicans ahead of the 2020 elections. President Donald Trump submitted two new slates of judicial nominations in August, announcing candidates for the 2nd and 9th U.S. Circuit Courts of Appeal and a bevy of trial judgeships. There are currently 112 vacancies on the federal courts, according to the Judicial Conference of the United States.

“We’re not going to leave a single vacancy behind by the end of next year — and it’s noteworthy that the Democrats are now trying to intimidate the Supreme Court,” McConnell said, referencing a recent legal filing from Democratic senators that warned a pro-gun rights ruling could inflame the progressive court-packing campaign.

Five Senate Democrats submitted the filing, called an amicus brief, in a Second Amendment case pending before the high court. The brief urged the justices to dismiss the case, lest the public conclude the Court should be “restructured in order to reduce the influence of politics.”

Senate Republicans responded with their own letter, promising the size of the Court would remain fixed as nine for as long as the GOP controls the upper chamber.