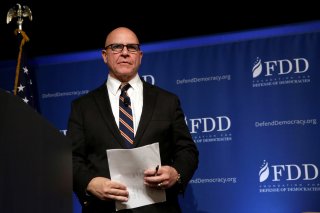 With the failure of America’s two-decade-long nation building project in Afghanistan on full display, an array of former officials have stepped into the spotlight to offer their thoughts on why the Taliban has been able to consolidate control over Afghanistan so quickly. Speaking at a recent Wilson Center event, H.R. McMaster, the retired U.S. Army lieutenant general who served in Afghanistan and was National Security Advisor to former President Donald Trump, attempted to place blame for the Taliban’s gut-wrenching victory on the “defeatists” who advocated for an end to America’s longest war.

Two key claims ran through McMaster’s talk at the “Hindsight Up Front: Afghanistan” event hosted by the Wilson Center. First, the United States had been “winning” in Afghanistan until it made unnecessary concessions to the Taliban during negotiations. Second, maintaining a “sustainable commitment” in Afghanistan in the years to come, rather than withdrawing, would have allowed America to ultimately achieve success at a low cost.

In light of Craig Whitlock’s publication of the “Afghanistan Papers,” which documented how U.S. officials systematically lied to politicians and the public about the progress of the war, it is perhaps unsurprising that McMaster’s analysis of the Taliban’s success devoted little attention to the two decades that the United States spent attempting to build a competent Afghan government. Conveniently, the starting point for McMaster’s analysis is the U.S.-Taliban peace deal—cynically referred to by McMaster as the “capitulation agreement”—that was negotiated after he left the Trump administration.

According to McMaster, “we’d won” the war in Afghanistan but then “inflicted defeat on ourselves” by pursuing a negotiated settlement with the Taliban. During the Wilson Center event, McMaster argued that if the Biden administration had continued the military mission in Afghanistan instead of withdrawing, the United States would have been able to protect its core interests at an acceptable cost. “I think what is important is for us to develop strategies that are flexible but are sustainable over time, whether it’s 2,500 or 8,500 or 12,000 [troops]. You know, we’re the United States of America man, if we were Ecuador, that might be a stretch. But we can sustain that commitment.”

McMaster spent no time explaining exactly how the U.S. military had previously “won” in Afghanistan or addressing what the Taliban’s rapid advance suggests about the nature of the victory purportedly squandered by “defeatists” such as President Joe Biden. Contrary to McMaster’s assertion that the United States was winning prior to the Trump administration’s “capitulation,” the fact is that the Taliban had been consistently gaining strength, leaving the Afghan government in control of just over half of the country when U.S.-Taliban negotiations began. While assuring his audience that the American public does not understand “how low of a cost it was to sustain [the] commitment," McMaster ignored the fact that the cost of a continued U.S. military presence in Afghanistan, in both American lives and taxpayer dollars, would undoubtedly increase if Biden failed to withdraw all U.S. forces by the current August 31 deadline.

Outside of mocking the idea that there is no military solution to the conflict and repeatedly stressing the necessity of a long-term U.S. military presence in Afghanistan, McMaster did not articulate how he would change U.S. strategy to reach key objectives—such as establishing a functioning Afghan state or eliminating conditions that foster support for the Taliban—that the twenty-year military mission failed to achieve. As McMaster asserted that a “sustainable commitment” in Afghanistan would have been capable of “prevent[ing] what is happening now,” but failed to convey what concrete objectives could be achieved by the continued deployment of U.S. forces, he gave the impression that his desired policy would be an open-ended policing mission aimed at maintaining the status quo in Afghanistan.

Toward the end of the discussion, McMaster identified a “terrorist ecosystem” that is supposedly waging “endless jihad” against the United States and is “connected from Southeast Asia, across South Asia, into the greater Middle East, into North Africa, into the G5 Sahel and the Horn of Africa.” In McMaster’s eyes, this network poses an omnipresent threat that necessitates “redoubl[ing] our efforts against jihadist terrorists” and can only be mitigated by an active U.S. military footprint throughout the world.

In his concluding remarks, McMaster expressed his frustration with the American public’s lack of support for “endless wars” and argued that U.S. officials must better inform the American people about the war in Afghanistan and other counterterrorism initiatives. In a peculiar aside intended to highlight how waning public support led the United States to talk itself “into defeat in Afghanistan,” McMaster claimed that Kim Il-sung decided to begin an insurgency against South Korea after seeing “American protests against the war in Vietnam” and sensing “American weakness.”

“We had this defeatist narrative in Afghanistan, you know, ‘end the endless wars.’ Well first of all, it’s an endless jihad, waged against us, and we’d won,” McMaster said. “The whole narrative about it was wrong, so I think the first thing we have to do is inform the American people better … [about] what is at stake in the fight against jihadist terrorist organizations … and what is a strategy that will deliver a favorable outcome.”

Given the disturbing lengths that senior officials have gone to in order to hide the failure of the U.S. effort in Afghanistan from the public, one would hope that figures such as McMaster might have learned from the misdeeds documented in the “Afghanistan Papers” and will prioritize transparency in the future. Unfortunately, McMaster’s focus on informing the American people appears to stem from a cynical interest in ensuring higher levels of public support for the next open-ended conflict that the United States embarks on. Rather than attempting to educate the public on the purported necessity of continuing a continent-spanning war on terror, McMaster should reckon with why the American people “sadly … seem to be wanting to disengage from these endless wars.”

Without an adequate examination of the twenty-year nation building and counterinsurgency project that preceded the withdrawal—which McMaster himself was intimately involved in—he may be able to deflect blame, but he will never develop a full understanding of the many factors that led to the heartbreaking fall of Kabul. McMaster’s myopic analysis of the reasons for America’s failure in Afghanistan and his refusal to reflect on the roots of the Afghan state’s rapid collapse are emblematic of the inherent limitations in his approach to foreign policy. By reflexively turning to military force as a tool to achieve desired policy outcomes, McMaster fails to recognize the ways in which interventions—such as the U.S. interventions in Iraq, Libya, and Yemen—can ultimately undermine U.S. interests and benefit the very extremists that he views as an existential threat.