This Means War: How the Kurds Could Fight the Turks with American Weapons 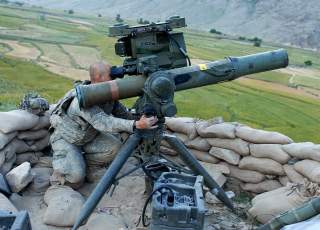 Key point: The Kurds might not have America's protection anymore, but they do have high-tech U.S.-made weapons.

U.S. president Donald Trump in a surprise move on Oct. 7, 2019 ordered American troops to withdraw from northern Syria, effectively clearing the way for Turkish president Recep Tayyip Erdogan to send his own troops into the Kurdish-controlled region of Syria.

Syrian Kurdish fighters are an important part of the U.S.-supported Syrian Democratic Forces group, which in late 2017 helped to liberate Ar Raqqa, the city in eastern Syria that had functioned as the de facto capital of the Islamic State terror group.

Now the United States has abandoned the Kurds. The Turkish army on Oct. 9, 2019 bombarded Kurdish towns near the Syrian-Turkish border. Today the AP reports that Turkish troops took control of at least one village from Kurdish fighters in northern Syria.

But don’t expect a Turkish invasion to be painless for the Turks. The Kurds in northern Syria possess arguably the most important weapons of the eight-year Syrian civil war: anti-tank guided munitions. The Turks in the past have lost tanks in their periodic incursions into Syria.

They’re likely to lose more. “There will be lots of resistance if they cross the border,” Mazlum Kobani, commander of a Kurdish-led militia, told The New York Times in reference to the Turks. “We will not accept them on our land in any way.”

Insurgent groups in Syria began acquiring ATGMs in meaningful numbers around 2014 and deploying them against Syrian armor as well as to thwart attacks by Iranian Revolutionary Guards troops fighting Syrian government forces.

Chinese, Russian and European anti-tank missiles are in use in Syria. But arguably the most important missiles are American-made TOWs. With their 10-pound warheads and two-mile range, the wire-guided TOWs are among the most lethal weapons on the Syria battlefield.

It’s unclear exactly who provided the TOWs, which only are made in the United States. Saudi Arabia reportedly paid for an early batch of the missiles. Washington starting in 2017 supplied heavy weaponry to Kurdish forces including thousands of machine guns and rocket-propelled grenades, but the U.S. government declined to say whether the arms-consignments included TOWs or similar ATGMs such as the smaller Javelin.

Erdogan and his lieutenants openly have worried about heavy weaponry landing in Kurdish hands. "We want to believe that our allies will prefer to side with us, not with a terrorist organization," Erdogan said in May 2017.

“Every weapon seized by [the Kurds] is a threat to Turkey,” Turkish foreign minister Mevlut Cavusoglu said around the same time.

In a dramatic retort later in 2017, the YPG -- a Syrian-Kurd armed group that Turkey considers a terrorist organization -- circulated a video apparently depicting its forces firing a TOW at a tank belonging to pro-Turkey Syrian rebels in northern Syria.

Aaron Stein, a senior fellow at the Atlantic Council, characterized the video as “ATGM diplomacy.” “The YPG has used ATGM diplomacy during times of crisis with Turkey, but I'm not sure if this is a coincidence or some effort at signalling,” Stein told Military Times.

The same type of weapon poses a major threat to Turkish tanks. “Turkish operations in Al Bab were far from impressive and [Islamic State] was able to use ATGM to great effect,” Stein said.

With Trump having abandoned the Kurds despite protestations from his own advisers and the Republican Party, it’s unlikely Kurdish groups will receive fresh shipments of TOWs or other ATGMs any time soon.

But there are plenty of other sources of anti-tank missiles. “If you have money you can find TOW systems,” Shervan Derwish, an SDF commander, told Military Times.

David Axe serves as Defense Editor of the National Interest. He is the author of the graphic novels  War Fix, War Is Boring and Machete Squad. This first appeared earlier in October 2019.