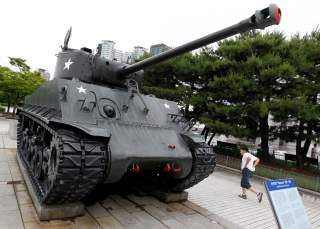 Key point: The Battle of the Bulge was a dramatic, brutal fight. Not ever movie portrays it correctly, but these ones do properly show what Americans were sent into harm's way to defend their country.

An official U.S. delegation was in Europe on December 16 to mark the seventy-fifth anniversary of one of the dramatic and climatic battles of World War II: the Battle of the Bulge—an offensive that lasted more than a month.

The Germans tried to stem the Allied invasion with a surprise mid-winter attack along a quiet sector on the front. The strike caught the Americans off-guard. What followed was some of the bloodiest and most savage fighting of the war.

It’s hard to make Great War films about big battles. Battles are complex, messy affairs. It is also difficult to explain to lay audiences what’s going on. Many have tried their best to bring the Battle of the Bulge to the silver screen, none with complete success. But here are some very worthy attempts:

Battleground (1949): This was one of the first big war movies to come out after the conflict was over, and it proved to be a huge money-maker for MGM. Americans were still enamored with the recent triumphs of the greatest generation. Like many war films did at this time, this movie largely eschewed the “big picture” and focused on a familiar troupe, following a squad of all-Americans from 101st Airborne. It’s a slightly ethnically diverse mix—the Latin from Los Angeles, the fresh-faced kid from the Midwest, the grizzled veteran, etc.

Attack (1956): Released a decade after the war, this one reflected more the current age at the time: the outbreak of the Cold War and the ambivalence of the Korean conflict. Hollywood starts to deliver films where WW II is not just the “Good War” anymore. At the height of the Battle of the Bulge, an inept American captain who has no business commanding men in battle is told to take and hold a town, but his cowardly actions clash with a courageous second-in-command. Not surprisingly, the U.S. Army was not enamored with the script and wouldn’t loan any military equipment or support for the film. Too bad — this was a great gem of film with a fabulous cast and was brilliantly directed.

Battle of Bulge (1965): It worked so well with The Longest Day (1962), so some studio suits probably thought they’d just rinse and repeat: a cast of stars, a sprawling battle and a giant box office. Well, they got the first two out of three. Maybe it was because the film was in color, when audiences still thought color was for musicals, fantasy and science fiction. They still liked their history in black and white, like the newsreels during the war. Maybe if the movie had been more historically accurate? After all, it was only a decade and a half after the war, and people still remembered what really happened.

Patton (1970): Has Hollywood ever made a better movie about a general? I think not. In pivotal moments in the movie and the history of the battle, Patton turns his Army on a dime, races over frozen roads, and drives into the flank of the German offensive—check and mate.

What these films have in common is that no matter how good or bad, accurate or fanciful, is they remind there was once a real battle and real American soldiers were put in harm’s way and asked to do near impossible things under the most brutal conditions. For us.

They fight our wars. They defend our freedoms. We should never send them out into the world unless we have done our part to make sure they are trained, equipped and ready for the fight. That obligation is no less important today.