Meet the 5 Best Shotguns in the World (Winchester, Remington and Beretta All Made the Cut) 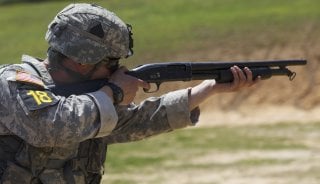 Manufactured by Benelli Armi SpA, a subsidiary of Beretta, the M2 Tactical is a somewhat larger semi-automatic shotgun than the 1301. The M2 has a 18.5 inch barrel but can accommodate five rounds in the internal magazine.

Meet the 5 Best Hunting Rifles on the Planet