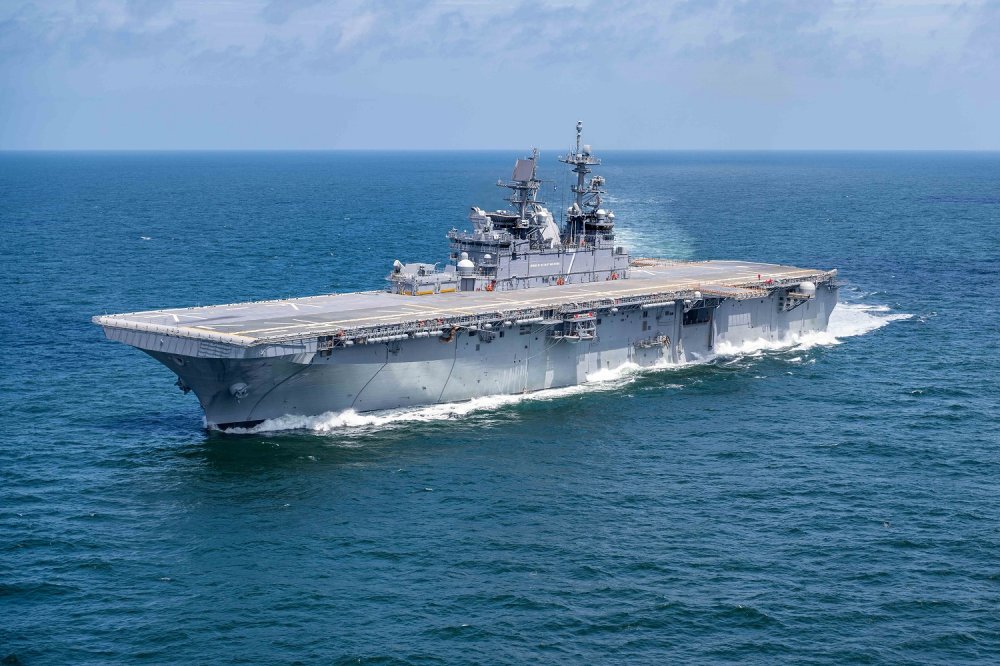 The new ship just completed its acceptance trials in the Gulf of Mexico, a series of exercises intended to prepare the amphib for deployment by assessing its propulsion, communication, navigation, weapons systems and aviation platforms, a Navy statement said.

“You have a work-up cycle where you do various exercises and training to prepare for deployment,” a Navy official told Warrior.

Designed as aviation-centric amphibs, the first two America class ships do not have well-deck for amphibious vehicles but rather are engineered with a larger hangar for aircraft, increased storage for parts and support equipment and additional aviation fuel capacity to support a higher op tempo. The third America-class ship, the now under construction LHA 8, will bring back the well deck for amphibious operations.

Execution of this new strategy is, depending upon the threat, also reliant upon 5th-generation aircraft; the Corp F-35B, now operational as part of Marine Corps Air Ground Task Forces aboard the USS Wasp and USS Essex, is intended to provide close-air support to advancing attacks, use its sensors to perform forward reconnaissance and launch strikes itself. The success of an amphibious attack needs, or even requires, air supremacy. Extending this logic, an F-35 would be positioned to address enemy air-to-air and airborne air-to-surface threats such as drones, fighter jets or even incoming anti-ship missiles and ballistic missiles. The idea would be to use the F-35 in tandem with surveillance drones and other nodes to find and destroy land-based enemy defenses, clearing the way for a land assault.

The entire strategic and conceptual shift is also informed by an increased “sea-basing” focus. Aviation-centric amphibs, potentially operating in a command and control capacity with smaller multi-mission vessels, could launch attack operations as sovereign entities at safer distances. Senior Navy officials have explained that larger “host-ships” would operate as “seaports, hospitals, logistics warehouses and sea-bases for maneuver forces.”

Big-deck amphibs like the America class, in particular, are engineered with expansive medical care facilities such as “hospital beds and an operating room,” a Navy official explained to Warrior.

Dispersed approaches, using air-ground coordination and forward positioned surveillance nodes, can increasingly use synchronized assault tactics, pinpointing advantageous areas of attack. Not only can this, as the essay indicates, exploit enemy weakness, but it also brings the advantage of avoiding more condensed or closely-configured approaches far more vulnerable to long-range enemy sensors and weapons. Having an advanced air power such as an F-35B, which can bring a heavier load of attack firepower, helps enable this identified need to bring assault forces across a wide-range of attack locations. None of this, while intended to destroy technologically sophisticated enemies, removes major risks; Russian and Chinese weapons, including emerging 5th-generation fighters, DF-26 anti-ship missiles claimed to reach 900-miles and rapidly-emerging weapons such as drones, lasers and railguns are a variety of systems of concern.

Technical adjustments were made to the flight deck of the USS America to enable the ship to withstand the heat generated by the take-off and landing of the F-35B; these changes are also built into the future USS Tripoli.

The USS Tripoli is designed with the high-tech Navy ship-based computing network called Consolidated Afloat Network and Enterprise Services, or CANES. Overall, the USS Tripoli is 844-feet long and 106-feet wide with a weight of more than 44,000 tons. A fuel-efficient gas turbine propulsion system brings the ship’s speed up to more than 20 knots, a previous Huntington Ingalls statement said.

The Tripoli carries 1,204 and 1,871 troops, meaning the ship is engineered to carry a Marine Expeditionary Unit, the statement added.