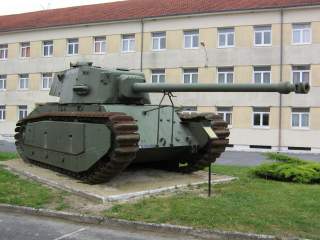 Key point: France was never able to use their new tanks against Berlin, but it did give them a leg-up on restoring themselves as a major power.

The design of the ARL-44 heavy tank actually took shape under the German occupation of France, according to the excellent tank history website

Tanks-Encyclopedia.com. “During the occupation, the Germans asked engineers at the French tank-producing firms Hotchkiss and Somua to build a tracked vehicle that could remove snow from Luftwaffe airfields and Kriegsmarine ports. Under the pretense of building this vehicle, the engineers worked on a new tank design for use after the war. This would later become the ARL-44.”

After the Allied liberation of France, President Charles de Gaulle, determined to restore France as a major power, wanted a heavy tank that could participate in the final offensives to defeat the Third Reich. But France’s military-industrial base had been devastated by five years of war and German looting. The Free French military was dependent on Allied—mainly American—equipment such as Sherman tanks.

Yet there was another source of weapons at hand, one so deliciously ironic. “German Maybach engines and 75 mm guns could be sourced in German army supply depots inside France,” explained Tank-Encyclopedia. “There were a number of captured or wrecked German Panther and Tiger tanks that could be used to obtain parts.”

To save time, French engineers initially decided to base the design on pre-war models such as the heavy—or so they were considered at the time—Char B1 and  FCM F1 tanks, albeit suitably modernized. The first version would have been a 43-ton vehicle armed with a 75-millimeter gun that could penetrate three inches of armor at a range of almost one mile, and protected by 2.4 inches of frontal armor.

Yet by early 1946, the French Army realized this wasn’t much of an improvement compared to the Sherman medium tanks, and captured German Tigers and Panthers, the French were already using. The Tiger II (“King Tiger”), for example, weighed in at seventy-five tons and six inches of frontal armor (today’s U.S. M-1 Abrams weighs almost seventy tons).

So, back to the drawing board. What emerged was more of a fifty-ton vehicle, not as heavy as the big German “cat” tanks, but armed with a converted ninety-millimeter naval gun and with frontal armor almost five inches thick. Though De Gaulle envisioned an armada of six hundred heavy tanks, only sixty ARL-44s were built between 1949 and 1951.

Had the ARL-44 seen combat, then like the Tiger, it most likely would have battled Soviet tanks. Despite fragile brakes, suspension and gearbox, the French behemoth might have proved a formidable opponent. The ARL-44 “was one of the most heavily armored tanks inside NATO, as the 120-millimeter, 45-degree frontal slope was equivalent to 170 [millimeters of armor, or 6.7 inches],” concluded Tank-Encyclopedia. “The 90-millimeter was proven accurate and a good asset against the latest generation Soviet T-54/55s. However, the hull configuration, high profile, obsolete suspensions were radical trade-offs which limited its tactical role alongside faster tanks.”

But as in 1914 and 1940, France again had missed the boat. The era of the heavy tank was fading, replaced by main battle tanks such as the U.S. M-48 and T-55, which functioned as both heavy breakthrough tanks and light tanks for the pursuit. Instead of having to coordinate multiple types of tanks on the battlefield, there would be one type. The ARL’44’s chance for glory had passed.

Michael Peck is a contributing writer for the National Interest. He can be found on Twitter and Facebook. This first appeared in November 2018.