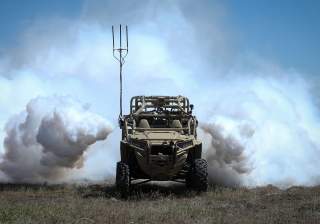 2 Dec. 2019 -- Self-driving civilian vehicles can rely on marked lanes, paving, curbs, and access to GPS and mapping applications. One of the big attractions of 5G networks is how their much greater bandwidth might make self-driving cars safe on the open road.

By contrast, an unmanned military vehicle might not even have a map to rely on. GVSC has developed navigation software where the vehicle starts with no map data, slowly explores the area, and builds its own map. This mode isn’t enabled on all vehicles, but it’s shown promise in experiments.

The GVSC has even done experiments where one unmanned vehicle explores the area and shares its map data with others. Still, there’s long term potential to swarm expendable scout robots in an urban area to map the roads, alleys, and underground tunnels, before human troops enter these potential ambush zones.