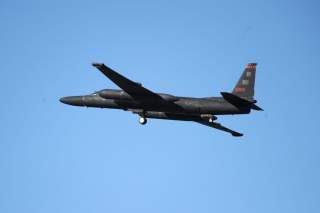 Vito’s mission took him directly over Moscow and its extensive network of newly built air defenses, which ringed the city in three concentric circles at twenty, forty, and sixty miles from the city center.

Built in complete secrecy by Kelly Johnson and the Lockheed Skunk Works, the original U-2A first flew in August 1955. Early flights over the Soviet Union in the late 1950s provided the president and other U.S. decision makers with key intelligence on Soviet military capability. Its use remained secret until May 1, 1960, when a surface-to-air missile shot down Francis Gary Powers’ U-2 on a reconnaissance flight over Soviet territory.

Carmine Vito, one of the first six pilots trained to fly the high-altitude reconnaissance craft for the CIA, is the only U-2 pilot to fly directly over Moscow. As explained by Eric Hehs in his article Carmine Vito: U-2 Pilot for Code One Magazine, his flight was the third operational flight over potentially hostile territory, or what the pilots called ‘hot’ flights. Carl Overstreet flew the first such flight of the U-2 on Jun. 20, 1956. The mission covered Poland and East Germany. Then Hervy Stockman flew over Soviet territory on Jul. 4, going as far north as Leningrad to photograph naval shipyards and then west to the Baltic States to cover jet bomber bases. The fourth, fifth, and sixth missions were flown by Marty Knutson, Glen Dunaway, and Jake Kratt. All were successful.

“The Russians launched planes to intercept Overstreet on the first flight,” notes Vito. “But they couldn’t reach him.” Stockman’s flight was also detected by Soviet radar. Several MiG fighters scrambled to intercept him, too. As with previous flights, the intercepts failed. Soviet fighters could not approach the altitude needed to shoot down the lofty U-2.

Vito’s selection for the Moscow mission was more a function of circumstance than of design when the orders came to fly. The U-2 detachment at Wiesbaden was typically given an alert notice from headquarters twelve hours before takeoff. The notice usually came before five p.m. During those twelve hours, ground crew and pilots prepared for the flight. Lockheed, Pratt & Whitney, and Kodak crews conducted ground checks of the airplane, engine, and cameras. Pilots suited up in their specialized partial pressure suits and breathed pure oxygen to ward off the effects of rapid decompression (the bends). To purge nitrogen from their blood, U-2 pilots had to be “on the hose” for at least two hours before they were given the green light for takeoff.

“Without a go signal from headquarters, everyone headed for the club after five that evening,” explains Vito. “On that particular weekend, the 4th of July, most everyone was celebrating. When the late go came down from headquarters, I was the only one who had had only one drink. So, even though our order of mission flights had been predetermined by drawing straws, I was selected for the mission.”

After forty-six years of describing this particular U-2 mission, Vito can’t be certain if he’s telling the story from actual memories or telling it from memories of previous descriptions. Whichever the case, he remembers the firework display keeping him awake that night and the obligatory steak and egg meal early the next morning. “They always fed us steak and eggs before a flight,” he says. “I didn’t want steak and eggs at two in the morning, but they were on the checklist. So I had to eat.”

Vito’s route took him over Kracow, Poland, and then to Brest and Baranovici in the Ukraine. He stayed on this east-northeasterly route, overflying Minsk on his way to the Soviet capital.

The mission began in bad weather. “We had about 200 feet of visibility on the ground,” recalls Vito. “The sky was clear at 3,000 to 4,000 feet, but I had undercast halfway inbound.” The weather cleared as Vito followed a railroad line from Minsk to Moscow. At an altitude of more than 66,000 feet, he listened to Peter and the Wolf, a Russian musical composition with narration, transmitted from a Soviet radio station. Small mosaic fields of the collective farms passed below him. “Those fields reminded me that Russian farmers tilled the land by hand,” he says. “I couldn’t get mad at people who work that hard. I was never mad at the Soviet people themselves, just at their government.”

Vito’s mission took him directly over Moscow and its extensive network of newly built air defenses, which ringed the city in three concentric circles at twenty, forty, and sixty miles from the city center. A smoggy sky hid the city below. “My bubble burst,” Vito recalls. “I thought, Gee I came all this way for nothing. But the filters on my camera cut through the haze. A year or so later, I learned that the resulting film picked up some remarkable detail.”

According to a CIA history of the U-2, Vito’s mission came back with images of the Fili airframe plant where the Soviets were building their first jet bomber (known as the Bison to the West); a bomber arsenal in Ramenskoye; a rocket engine plant in Khimki; and a missile plant in Kaliningrad. From just east of Moscow, he turned north to the Baltic coast and then back south to West Germany.

“I learned later that the Soviets launched at least five fighters to intercept my flight,” says Vito. “Two planes took off initially. The lead plane aborted takeoff, ran off the runway, and exploded. The wingman went through lead’s flames and then bailed out. Two more airplanes scrambled and were refueled in the air. Those airplanes got lost or collided. The pilots bailed out. A fifth plane scrambled but couldn’t find the tanker. He was lost and never found to this day.” Vito never received credit for five aerial victories. “After all, I never fired a shot,” he says.

On his way back to West Germany, the Canadian radar came on the air: “Lone Ranger, this is Tonto. Keep heading the way you are going. You have twenty-two minutes to touchdown.”

“I knew they were talking to me because they had the best radar around and had picked us up on previous flights,” recalls Vito. “But U-2 pilots had to observe complete silence on the radio. To this day, I wish I could have replied, ‘Ti Ee Kemosabe.’”