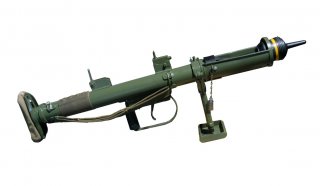 During the First World War, the British looked to break the stalemate through the “landship program,” which was headed by First Lord of the Admiralty Winston Churchill. A program considered creating massive vehicles—weighing as much as 300 tons or more—that could cross the trench system. Deemed impractical, it did lead to the development of the first tanks.

Just as the tank solved the problem of mobility on the battlefield it created a new problem; namely how to stop enemy tanks in their tracks. At the outbreak of the Second World War, the British had such a firearm that could do the trick. This was the Boys Anti-Tank Rifle, which was officially known as “The Rifle, Anti-Tank, .55in, Boys.” Nicknamed the “elephant gun” because of its massive size and large bore the gun was developed by Captain H.C. Boys, the assistant superintendent of design at the Royal Small Arms Factory, Enfield, and a member of the British Small Arms Committee.

It was originally to be called the Stanchion, but Captain Boys died a few days before the rifle was approved for service in November of 1937 and subsequently named in his honor.

The Boys Anti-Tank Rifle fed from a five-shot magazine, and due to its size was fitted with a large bipod at the front and grip below the padded buttplate. It actually proved adequate against the light tanks used by the Germans at the outset of the Second World War but was gradually phased out as the thickness of enemy armor increased.

The Boys was also used alongside the No. 68 anti-tank rifle grenade, officially known as the “Grenade, Rifle No. 68/AT.” This was developed in 1940 as an alternative anti-tank weapon for infantry soldiers. It is also notable in that it is believed to be the first true “High Explosive, Anti Tank” (HEAT) device to use in combat. It could be fired from the standard British SMLE rifle, and was capable of penetrating armor up to two-inches thick.

Following the defeat of the French Army in early 1940, the British Army was able to escape from the continent via the so-called “miracle of Dunkirk.” The British were forced to abandon much of their heavy equipment but also found that neither the Boys Anti-Tank Rifle nor the No. 68 AT Rifle Grenade proved to be effective as anti-tank weapons. The Boys was too large, effective only at short ranges, and only really effective against light tanks; while the grenade was too light to deal any serious damage.

Clearly, a different weapon was required to stop German armor. British designers looked to create a weapon that could launch projectiles of larger size and with greater range than that of the No. 68. While a number of concepts were considered it was that of Lieutenant Colonel Stewart Blacker of the Royal Artillery that ended up being adopted.

The irony is that Blacker actually had originally sought to create a lightweight platoon mortar that relied on the “spigot” discharge system. This works without the barrel being used to actually launch the projectile. Instead, the projectile is fired from the spigot—usually a heavy steel rod—which is driven into the shallow tail of said projectile. In this design, the spring hits the charge of the projectile. The pressure of the powder gases launches the projectile off the spigot.

Blacker had envisioned his weapon as something that could be used as a dual purpose launcher—either for high explosives with indirect fire like a mortar, or direct fire as an anti-tank weapon. His concept led to the creation of the 29mm Spigot Mortar, which earned the nickname “Blacker Bombard.” It saw use with the Home Guard and Airfield Defence units, but had a shortcoming in that it couldn’t actually penetrate armor.

The biggest problem was that the Spigot Mortar could simply not fire a powerful enough bomb, but the solution was found by utilizing hollow-charge ammunition. This concept had existed since the second half of the nineteenth century when American inventor Charles Edward Munroe discovered that an explosive could yield more damage if there were a recess in it facing a target. This was known as the Munroe Effect and it essentially provided—and still does—a way for infantry to present a serious threat to armored vehicles.

Blacker looked to develop a specific portable anti-tank version of the Spigot Mortar, which was dubbed the “Baby Bombard,” but it was found unsatisfactory mainly due to the round. Blacker was then posted to other duties, and the project was handed off to Major Millis Jefferis, who took the prototype and rebuilt it. He combined it with a hollow-charge mortar bomb and created the so-called “Jefferis Shoulder Gun.” After some trial and error with the ammunition, the weapon impressed the Ordnance Board of the Small Arms School and the weapon was put into production in August 1942.

It was renamed “Projector, Infantry, Anti Tank”—thus PIAT for short—and the Ordnance Board ordered that it be issued to infantry units as a hand-held anti-tank weapon. The PIAT was manufactured in significant numbers by the British company Imperial Chemical Industries beginning in 1942 and remained in production until 1950. By 1945 a total of 115,000 were produced, with several thousand more manufactured by the start of the Korean War.

As a side note, the PIAT was actually involved in a battle that didn’t involve shooting at German—or later Chinese—tanks. This was rather over the name and compensation. In 1944 a press report actually credited the PIAT, as well as the Spigot Mortar, to Jefferis, to which Blacker not surprisingly took exception. According to the book Britain’s War Machine: Weapons, Resources, and Experts in the Second World War, in the end, Blacker received £25,000 from the Inventions Board for his contribution to the PIAT gun—a sum that would be worth nearly one million pounds today. As for the name, even then-Prime Minister Winston Churchill asked why the name was changed from the Jefferis Shoulder Gun to PIAT, but in the end, the military-style nomenclature won out.

The PIAT was used by British and Commonwealth forces beginning in mid-1943 and was reportedly first used in action by Canadian forces during the Allied invasion of Sicily, where it actually underperformed. This was due to a fault in the bomb, which failed to detonate and instead misfired unless a target was hit squarely. The problem was remedied by the invasion of the Italian mainland, but confidence was still lacking until the invasion of France a year later.

However, the weapon proved rather effective with refined ammunition and it was reported that seven percent of all German tanks that were destroyed by British/Commonwealth forces in the Normandy Campaign were knocked out of action by PIATs. That was compared to six percent destroyed by aircraft.

Moreover, just as the British looked to create a more powerful anti-tank weapon so too did the Germans look at ways to defeat those weapons. German tanks were increasingly outfitted with armored skirts that served to deflect hollow-charge ammunition from the PIAT as well as the American bazooka.

The PIAT was utilized in all theaters of operation and it remained in use until the early 1950s. The Australian Army even used the PIATs during the Korean War. During World War II it was used by various resistance forces and the British even managed to have PIATs smuggled into occupied Poland where it was used during the 1944 Warsaw Uprising. Through the Lend-Lease program, the British even supplied 1,000 PIATs and 100,000 rounds to the Soviet Union. It was also used by the Israeli Haganah against Arab tanks during the 1948 Israeli War of Independence. Six British and Commonwealth soldiers were awarded the Victoria Cross in World War II for actions that involved the PIAT.

As with many small arms, the PIAT had its share of supporters and detractors. Those who liked it found that it was effective and simple to operate. It produced no dangerous backblast or muzzle flash and was capable of defeating the armor of most tanks of the late World War II era. However, it was also rather heavy, especially when compared to U.S.-made bazookas. It had a rather unusual and moreover uncomfortable cocking procedure for the shot, and when fired produced a very heavy recoil.

As produced, the PIAT was 39 inches long and weighed a backbreaking 32 pounds empty! It had an effective direct fire range of 115 yards (105 meters) and a maximum indirect fire range of 350 yards. The PIAT was capable of penetrating 75mm of armor and could do substantial damage to buildings or other defenses even at its maximum range. While not intended to be an indirect weapon, the spigot system did allow it to be used as a makeshift mortar by rotating the T-shaped shoulder stock 90 degrees and supporting it against a soldier foundation. During World War II the French resistance often used the PIAT in such a capacity as it lacked mortars or other artillery.