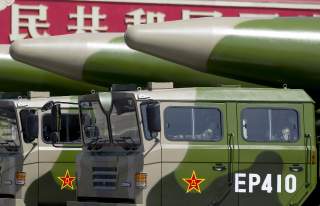 (This first appeared back in June of last year.)

“The newly commissioned weaponry of the Rocket Force is Dongfeng-26 missile,” Senior Colonel Wu Qian, spokesman for China Ministry of National Defense, told reporters on April 26. “After the trial and operational test, this type of missiles are ready to be equipped to the full establishment of unit and have since then been officially commissioned to the Rocket Force.”Wu broke down the four key features of the DF-26 missile and what it means for China’s capabilities. “As a new generation of medium-and-long range missile, DF-26 has the following four features,” Wu said. “First, it is researched, developed and manufactured by China independently and we have complete property right over it. Second, it can carry both conventional and nuclear warheads, capable of both rapid nuclear counter-strikes and conventional medium-and-long range precision strikes. Third, it is capable of launching precision strikes at both critical target on land and medium- and large-sized vessels at sea. Fourth, several new technologies have been applied to the missile, which helps increase the missile’s utilization and improve its integration and informationization.”