Meet the CZ75 Gun: One of Europe's Best Guns Can Now Be Yours 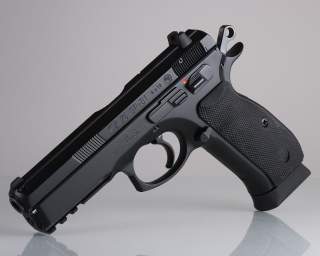 In the late 1970s, Czechoslovakia’s armaments industry released a new pistol that foreshadowed the “Wonder Nine” pistols that would sweep the world a decade later. The Cz75 drew on the country’s long small arms experience to produce a pistol that, had it been released in the West would have become a huge hit in the United States. The ongoing Cold War, however, ensured that the pistol would not reach America until the 1990s, though the pistol and its descendants are still popular today.

Czechoslovakia, a sovereign state founded in 1918, was formerly a part of the Austro-Hungarian Empire. Much of the former empire’s armaments industry, based in the northern part of the country, was absorbed into the new state at the end of World War I, and with it a tradition of producing—and exporting—quality weapons. At the end of World War II, the country was trapped behind the Iron Curtain, severely hampering trade with non-socialist nations, including small arms and other weapons.

In 1975 Czechoslovakia unveiled a pistol that was considered the most advanced of its time. The designers, brothers Josef and František Koucký, were brothers responsible for several Czechoslovakian gun designs from the 1940s onward. The brothers had previously worked on the ZK 420 semiautomatic rifle, ZK 403 submachine gun, and several machine gun designs. The new pistol was designated Cz75 pistol, after the state-owned arms company that produced it, Ceska zbrojovka (“Czech Armory”) and the year it was announced.

The Cz75 utilized many features found in contemporary handguns. It used the short recoil operated, locked breech pistol system invented by John Browning and subsequently used in almost every semi-automatic pistol designed since then. The top of the barrel features two locking lugs that fit into the bottom of the slide. After firing the barrel cams downward and the slide rushes back, ejecting the spent casing.

An all-steel handgun, the Cz75 was 8.25 inches long with a 4.8-inch barrel. Unloaded, the pistol weighed 2 pounds, 3 ounces. The pistol is produced as both a single and double action pistol, and includes a manual safety. This allows the pistol to be carried with a loaded round in the chamber, hammer back, and with the manual safety engaged--a condition firearms authority and writer Jeff Cooper came to call “Condition 1.” A flick of the safety leaves the pistol ready to fire with the light pull of the trigger.

One feature that set the pistol apart from the rest of the crowd was the Cz75’s prodigious magazine size. The Czechoslovakian pistol could hold fifteen rounds in a two column magazine. Although common today, this was very uncommon in the 1970s, with the Browning Hi-Power the only other pistol capable of matching such a large magazine. This large magazine was later further capitalized upon by a fully automatic variant of the Cz75. The automatic version had a rate of fire of over 900 rounds per minute and utilized a spare magazine in the front as a forward grip to add weight and control muzzle rise.

Czechoslovakia’s somewhat involuntary membership in the Warsaw Pact meant the country was often forced to use Soviet small arms over superior local designs. As a result, the national army never used the Cz75, instead deploying state-produced copies of the Soviet Tokarev, and later Makarov pistols. Josef and František Koucký’s invention was relegated to private sales and government sporting events. Still, export opportunities for this pistol were severely curtailed. Although largely unknown beyond the Iron Curtain, the Cz75’s reputation had spread far and wide among small arms specialists.

The fall of the Berlin Wall and the dissolution of the Warsaw Pact finally allowed the Cz75 to step into the spotlight. The pistol became the official sidearm of the armed forces and police, and licensing agreements made it available across Europe and the United States. In the U.S. the pistol was imported by Springfield Armory as the P9. Later Cz—rebranded CZ—took over distribution. The current version, the CZ75 SP01, has a slightly shorter barrel, firing pin safety, Picatinny rail for adding weapon lights and aiming devices, and an eighteen round magazine.

The CZ75 was an example of a superior local product suppressed by larger political forces—in this case, Soviet domination of Eastern Europe. CZ has gone on to produce numerous new small arms, including a new striker-fired pistol, the CZ10. While the future development of the CZ75 platform is open to question, gun enthusiasts finally have the opportunity to try legendary pistol themselves.