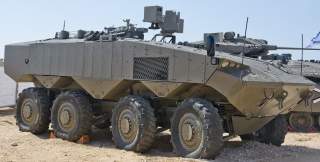 Israeli infantry will now have protection from an eight-wheeled armored personnel carrier called the Eitan. It moved into serial production with the Armored Vehicles Directorate in the Israel Ministry of Defense on February 9 according to the Ministry. The vehicle has an unmanned turret and is protected by the Iron Fist advanced, active protection defense systems.

It’s Israel’s first 8-wheeled armored combat vehicle and is based on the successful technology of the Merkava series of tanks and Namer AFVs. It can carry 13 soldiers and was developed due to the vulnerabilities in Israel’s aging M113s.

Developed with the tank administration and IDF ground forces it was tested in 2017 and 2018 in field trials. This included tests of its unmanned turret and trials with the Nahal infantry brigade. It will be fully operational by 2021. Its Iron Fist active protection system was developed by Israel Military Industries, which is now part of Elbit Systems. The Iron Fist is used on Bradley Fighting Vehicles in the US.

The vehicle has more than 1 million parts and will be produced at 60 locations in Israel using 20 tons of steel and 30km of welding wire for each behemoth. With 750 horsepower the vehicle can reach speeds of 90 km/hr. It has the latest technology and 34 computers on board with 10 day-and-night cameras.

“Five intense years of development, which began shortly after Operation Protective Edge, led to the moment,” says Brig. Gen. Guy Paglin, head of the armored vehicles directorate. It will provide combat soldiers quick mobilities, he says. It’s the world’s best protected APC, according to the Israelis. It will be built according to production lines of the Merkava Mark IV tank and Namer. “We have assigned professional and skilled workers to the mission,” says Col. Udi Amirah of the Development and Maintenance Center in the Technological and Logistics Directorate of the IDF.

The vehicle is a big leap forward for Israel which is modernizing its army with new technologies and digitization as part of its Momentum plan over the next several years. This will require large budgets and investment and the country’s political uncertainty after a year of three elections has not helped matters. But the army is going forward anyway with these necessities as Israel faces major challenges in the north with Iran and continued tensions along the Gaza border with Hamas.