Meet the F-16 Fighting Falcon: The Old Fighter Jet That Keeps on Killing 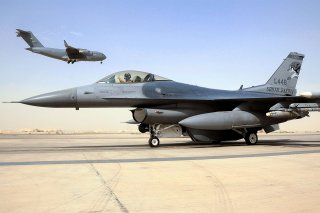 Key Point: The F-16 Fighting Falcon bears an unusual distinction: it is one of the only top jet fighters in the world to also be cost-efficient.

Fast and extremely agile, the light fighter does have some shortcomings in range and payload compared to larger twin-engine fighters like the F-15 Eagle, but that was easy to forgive due to costing less than half as much—around $18 million in 1999 ($27 million in 2017 dollars). This favorable bang-for-buck ratio has not been lost on air forces across the world—the F-16 currently remains the most popular aircraft in modern military service: out of 4,500 produced, nearly 2,700 currently remain in service in around twenty-six countries. Needless to say, the cutting-edge fourth-generation fighter of the 1980s will remain with us for a good while longer.

Support for a light fighter eventually consolidated in the Pentagon, due to simple economics: the Air Force liked the F-15, but realized it was too expensive to equip all of its fighter squadrons, so it came to seek a “high-low” force mix. Eventually, two prototypes faced off in a competitive trial in 1974: the Northrop YF-17 and the General Dynamics YF-16. The latter was unanimously found to be more responsive, while the former evolved into the Hornet fighters now serving in the Marines and U.S. Navy. The first production F-16As went on to enter service in 1980, joined by the two-seat F-16B variant.

Unlike the early model F-14 and F-15s, the Falcon was also designed as a multirole fighter, and it could lug up to seventeen thousand pounds of munitions or electronic-warfare gear on its eleven hardpoints, including a new generation of precision-guided weapons such as Maverick missiles and laser-guided bombs. A twenty-millimeter Vulcan cannon in the lower fuselage served as a backup weapon.

The U.S. F-16 fleet first saw action in the 1991 Gulf War, where it flew more than thirteen thousand strike missions loaded down with two-thousand-pound bombs and Maverick missiles. F-16s embarked on the largest airstrike ever over downtown Baghdad during the seventy-two-ship Form Q—though two of the Falcons were shot down by air-defense missiles during the raid and their pilots captured. One squadron took on “Wild Weasel” duties by hunting down Iraqi surface-to-air missile batteries with AGM-88 Harm missiles.

By one count, the Falcon has shot down seventy-six enemy aircraft, while only suffering one or two losses in aerial combat, generally under ambiguous circumstances (a Pakistani F-16 shot down another by accident; a Greek Mirage downed a Turkish F-16 in what had formerly been mock aerial combat). And of course, Falcons have continued to serve as bomb-toting workhorses for airstrikes on targets in Lebanon, Iraq, Libya, Syria, Afghanistan and Pakistan.

The most sophisticated F-16 in service today aren’t in the U.S. Air Force unit, but rather Block 62 F-16Es and Fs ordered by the United Arab Emirates. The new F-16s boast conformal fuel tanks that greatly extend the Falcon’s short-range at minimal aerodynamic cost, as well as an APG-80 Active Electronically Scanned Array radar. AESA radars represent the cutting edge of fighter-borne radar technology, due to their superior resolution and lower visibility to enemy radars. Currently, an even more advanced Block 70 version is being considered for production in India. However, the costs for these newer Falcons have also skyrocketed.