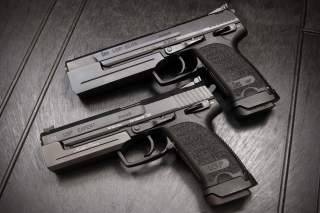 Key point: Berlin's P12 is unusual among European guns. However, the P12 has served well and was a very good choice.

If one looks at the service weapons of European countries, the Bundeswehr’s P12 is an anomaly. Chambered in .45 ACP, a normally American caliber, the P12 entered service at the turn of the millenium, far after most .45 caliber handguns were phased out of European service. It continues to serve today, living in the armories of select Bundeswehr units. But why was the P12 procured?

The answer lies in the pistol that can be considered the P12’s ancestor, the H&K Mk23 SOCOM. Developed to meet U.S. Special Operations Command’s (USSOCOM) requirement for a .45 caliber “Offensive Handgun,” it was developed from the outset to be ridiculously reliable and to operate suppressed, the suppressor being an important part of the development program.

However, the Mk23 was simply “too much gun,” measuring over nine inches long. Most units in SOCOM did not adopt it, opting to simply use other, smaller guns. However, BAAINBw, the Bundeswehr defense material acquisition service, acquired a limited number of Mk23s in 1998, putting them through trials, presumably to judge their effectiveness.

Meanwhile, H&K used a lot of the technology developed for the Mk23 to create the H&K USP, a smaller version of the pistol initially chambered for the new .40 S&W cartridge. But shortly after its release the USP was adapted to the 9x19mm and .45 ACP calibers. As the Bundeswehr desperately needed a new service pistol in 9x19 to replace its old stock of Walther P1s, a version of the USP in 9mm with a manual safety was quickly adopted as the P8.

But interest in a suppressed handgun remained. The USP .45 Tactical found to be suitable for Bundeswehr service. After some minor modifications, it became the Bundeswehr’s P12. Presumably, as special operators needed a pistol to be ready off the draw, the manual safety was removed and replaced by a decocking lever. The overtravel stop on the pistol’s trigger was also removed, probably due to operator preference.

The pistols are issued to a variety of special recon and direct action units in the Bundeswehr. The elite KSK, Fernspäher, and other recon troops are known to use the pistol. However not all recon units use it, lower level formations continue to use the standard P8.

The more special units get the P12 as it is used primarily as a suppressed handgun, hence the chambering in .45 caliber. As .45 ACP is a subsonic round in most standard loadings, it can be used in the P12 without procuring special ammunition that might decrease the terminal ballistics.

This stands in contrast to the MP5SD, another popular weapon with those units, that actively bleeds off gas from 9mm rounds to make them quiet, but at the expense of a significant amount of velocity from the 9mm round, limiting its terminal effectiveness. However, it’s important to note that the velocity reduction effect of the MP5SD’s suppressor is rare among suppressors, most retain or increase the velocity of a round passing through them.

What about the future? While the suppressed versions of the MP7 have seen service in the Bundeswehr, concerns about the lethality of the tiny 4.6mm cartridge remain. According to a report in ESUT, while increasing numbers of MP7s will be procured, there is no attempt to field a dedicated subsonic rifle cartridge like USSOCOM’s SURG. As such, the P12 will likely remain in service for many years to come.