Meet Heckler & Koch's HK416: The Rifle You Need To Know About 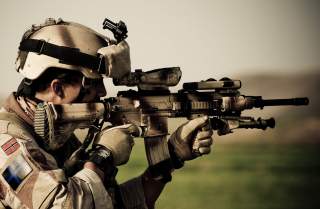 In 2017, the French military should begin taking delivery of a new individual weapon to replace the aging FAMAS rifle. The Direction Générale de l’Armement — the French defense procurement agency — announced in September 2016 that it would adopt the German Heckler & Koch HK416.

When France introduced the FAMAS in 1979, it became only the second country to possess a bullpup rifle. Austria was the first with the Steyr AUG, which debuted in 1978. The FAMAS first saw action during France’s military intervention in Chad in 1983 and later during the 1991 Gulf War. It has since armed French forces fighting in Afghanistan, the Ivory Coast, Iraq and Mali.

Unlike its contemporaries, the FAMAS makes use of a lever-delayed blow-back action that greatly simplifies the rifle’s action by not requiring its bolt to be locked when firing.

The French improved the FAMAS several times during its almost 40-year lifespan, adding new stocks, magazines and barrels. The Manufacture d’Armes de Saint-Étienne produced no fewer than 450,000 FAMAS rifles between 1979 and 2000, significantly more than the 100,000 HK416s Paris has ordered from Heckler & Koch.

There are more than 200,000 personnel in the French military, so additional orders of HK416s are possible.

The process to replace the FAMAS began back in 2011. Paris issued a request for proposals two years later. The French government restricted submitting companies to those with an annual turnover of at least €80 million — apparently in order to ensure reliable delivery of the rifles. This had the effect of pricing out French companies.

This article by Matthew Moss originally appeared at War is Boring in 2016.

The French army’s Arme Individuelle du Futur program formally got underway in 2014, with many of Europe’s major arms-manufacturers — including Fabrique Nationale, Heckler & Koch, Swiss Arms and Beretta — submitting designs. The French down-selected the HK416 and FN’s SCAR in July 2016 after rejecting the lesser-known VHS-2 bullpup rifle from Croatian firm HS Produkt along with Swiss Arms’ SG550 and Beretta’s ARX-160.

The contract is reportedly worth up to €400 million — that’s approximately $450 million — and will cover the manufacture of more than 100,000 rifles plus accompanying accessories, ammunition and services including initial maintenance and user training.

The French military should take delivery of the first batch of weapons in early 2017 and induct an additional 16,000 rifles yearly. The rifles will be made in Germany, as France’s formerly state-owned arsenals have closed down in recent decades. Manufacture d’Armes de Saint-Étienne, which made the FAMAS, closed in 2001.

Outwardly, the HK416 resembles the ubiquitous AR-15/M-16 platform, but internally it differs. Instead of using the AR-15/M16’s direct-impingement system, whereby the propellant gas acts directly on the rifle’s bolt, the HK416 relies on a short-stroke gas piston similar to that in Heckler & Koch’s G36.

France is not alone in selecting the HK416. Norway began adopting the weapon in 2007. Still, the French contract is a major boost for Heckler & Koch, in light of the controversy surrounding the G36 in German service.