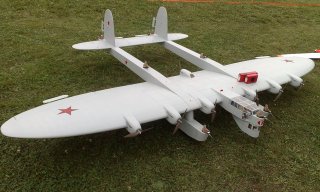 The Kalinin K-7 was one of the biggest airplanes ever built. It had massive wings, which were 196 feet long and over 7 feet thick at the leading edges. Instead of a fuselage, it used a large flying wing design with twin booms. Six engines were affixed to the leading edge of the wing, and another seventh engine on the back of the wing in a pusher configuration. The huge landing gear assembly was attached to this massive wing, which also housed the engines of the plane.

The wings were so tall internally, they had enough room for 128 passengers—including integrated sleeping quarters for 64 passengers, and 16 staterooms inside. In addition to the staterooms, which were furnished, there were also rooms for resting or sleeping, a radio room, smoking lounge, and even a small restaurant. The K-7 was the crème de la crème of air travel when it debuted, in the early 1930s.

The K-7 was designed by Soviet aircraft designer Konstantin Kalinin. Kalinin was a veteran of both World War I and the Russian Civil War, and airplane enthusiast. He designed a number of successful designs like the K-4 and K-5, which enjoyed some success as transport, ambulance, and reconnaissance airplanes, though they were significantly smaller in size and only had space for 10 to 12 passengers.

The K-7, on the other hand, was designed to be a long-distance heavy bomber and heavy transport plane. Its purpose was to serve some of Russia’s more remote locations, which were inaccessible to smaller planes that would have needed refueling.

The design was not the only innovative aspect of the plane, the materials it was made of were also unique. Rather than being made of aluminum, or even fabric-covered wood, the K-7 was made of a lightweight steel—chrome-molybdenum—that benefitted from a good strength-to-weight ratio. Due to these properties, chrome-molybdenum steel is often used in structural roles like tubing for bicycle frames, bottles for storing gas—and in the frame of the K-7.

In a propaganda win for the Soviet Union, the K-7 was a home-grown design and used Soviet-designed plans. The airplane materials were also sourced from inside the USSR. The high-strength steel was produced in Ukraine, at a foundry that was proudly powered by electricity from the Dnieper Hydroelectric Station, which had just opened in 1932.

Though no doubt an achievement for both Soviet heavy industry and domestic aviation, what designers failed to mention were the K-7’s engines, which were likely based off of an earlier Italian design from the aviation firm Fiat Aviazione.

In November 1933, the K-7 crashed, killing 14 people. Though two additional prototypes had been planned, they were never completed, and the project was canceled.

Konstantin Kalinin, unfortunately, shared a similar fate. Kalinin was picked up during the Great Purge, or Great Terror of the late 1930s, a period of intense political repression in the Soviet Union and widespread extrajudicial killing.

According to Russian sources, Kalinin was arrested in 1938, and after a seven-month detention was given a 10-minute trial, where he was accused of espionage and anti-Soviet activity. He was found guilty and likely shot by the Soviet secret police organization, the NKVD.

Though the K-7 was never commercially successful, it showed that the Soviet Union could domestically design and manufacture innovative aircraft designs at a time when dependence on foreign technology was considered an important vulnerability. Sadly, Kalinin would not partake in the blossoming Soviet aircraft industry.