Meet the Knifefish Drone: The Navy's Plan to Sink Any Enemy Mines 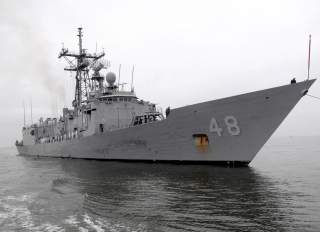 Key point: Mines are cheap and dangerous for manned-ships to eliminate. Therefore, the Navy wants to use drones to find and destroy mines.

The Navy’s Knifefish underwater minehunting drone recently helped identify and destroy a number of representative mine-hunting targets in a key test of the system’s development off the coast of Boston, service officials explained.

Simulating mine-hunting missions, Knifefish located and classified mine test targets submerged at various depths and on the seafloor. The Knifefish drone is also capable of locating and identifying mines buried in the seafloor, a statement from General Dynamics Mission Systems said.

Prior to this most recent test, the Navy conducted an assessment in Narragansett Bay, R.I., the 21-foot Unmanned Underwater Vehicle (UUV) used low-frequency broadband synthetic aperture sonar to find stealthy undersea mine targets.

“We put eight targets down across a range. The vehicle went around to detect the targets,” Rucker explained.

The concept of the Knifefish drone is to allow a manned surface ship to remain at a safe standoff distance away from risk of mine explosions – while the drone searches for and finds floating and buried mines in high-clutter environments. The drone also gathers environmental data to provide intelligence support.

While initially planned for the Navy’s Littoral Combat Ship, Rucker explained that Knifefish is engineered to operate from any surface ship. The drone is part of a multi-pronged plan to replace the Navy’s Remote Minehunting System, or RMS. The Navy effort includes transitioning from the RMS to a mine-searching surface ship and then the Knifefish UUV.

Rucker explained that the Knifefish exceeded expectations finding six of the eight mines during the test and that the Navy is still working on a timing improvement with some of the drone’s software.

Synthetic aperture sonar sends an acoustic ping forward before analyzing the return signal to obtain shape, size and distance of enemy targets; data from the UUV is downloaded from a Removable Data Storage Module for shipboard, analysis, according to information from its maker – General Dynamics Mission Systems.

Knifefish is slated to be operational sometime later this year.

This first appeared in 2017 in Scout Warrior here.