Meet the M1 Abrams: The Tank Making the 'Rounds' at the Salute to America Bash 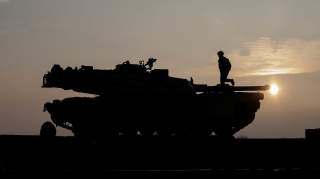