Meet the Makarov: This Gun From Russia Is the Elvis of Pistols 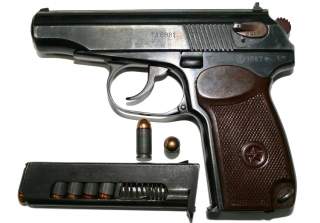 In 2002, former British Army soldier Colin Berry was in Afghanistan working as an agent for MI6, the United Kingdom’s secret intelligence service.

Berry’s mission was to buy as many Stinger and Blowpipe man-portable surface-to-air missiles as he could before they wound up in Al Qaeda’s arsenal.

Western government had given the weapons to the Afghan mujahedeen in the 1980s to help them shoot down Soviet attack helicopters. But now governments worried the SAMs, in terrorists’ hands, could shoot down civilian airliners.

Berry’s Afghan counterparts were armed, but he was not—and he wanted a weapon for personal protection. Berry asked an Afghan general named Waddoud for a gun. The man was happy to oblige.

“He called in one of his assistants and said something to him in Dari,” Berry wrote in his book The Deniable Agent: Undercover In Afghanistan. “The man went away and returned a few minutes later, bringing with him a small automatic pistol which he gave to Waddoud. Waddoud pulled the magazine out, racked back the slide to make sure the pistol was clear and handed it me.”

The pistol was a Makarov PM, the standard sidearm of Russian military and police forces since 1951 and a weapon found anywhere the Soviet Union had held sway. “Not bad at all,” Berry commented in his book.

Most who use the semi-automatic pistol have few complaints. The Makarov PM—short for Пистолет Макарова or Pistolet Makarova in honor of its chief designer Nikolay Makarov—is a lot like Elvis. It’s everywhere.

Concealable and compact, it fires the Russian 9 x 18 millimeter Makarov round, which is slightly shorter and fatter than the nine-millimeter NATO pistol round used throughout the rest of the world. It has a double-action mechanism—if a round is already chambered the pistol can be fired by pulling the trigger without the shooter manually cocking the hammer.

Even though it’s heavy for its size and has a stiff trigger pull, it’s a natural for police work and covert operations. The designer even copied features from the Walther PP police pistol designed in 1929, including its size and the shape of the pistol’s frame.

Not surprisingly, the Makarov was a favorite of state security agents in the USSR. Various Spetsnaz special forces team members carried the Makarov as their sidearm—particularly team commanders, deputy commanders and radiomen. There was even a suppressed version of the weapon for so-called “wet work” — kidnappings and assassinations where stealth, surprise and silence were necessary.

The Makarov PM had a certain panache in some Soviet-allied countries. For example, during the Vietnam War many senior ranking North Vietnamese Army officers and Communist Party officials carried the pistol. We know this because special operators from the U.S. military or the CIA frequently found the weapon when they searched live prisoners or dead bodies.

Furthermore, the Makarov is quite possibly the only pistol to ever travel through space. On board every Soyuz spacecraft is a Granat-6 survival kit. Along with the usual survival equipment—first aid kits and fishing gear—there’s a Makarov pistol and ammunition.

The Russian Ministry of Defense, officially phased out the old pistol in 2003, but thousands of the pistols remain in service with police officers, soldiers and intelligence personnel.

Soldiers on both sides of the current Ukraine war carry Makarovs.

Yet, its ubiquity belies a somewhat surprising history. It replaced a simple, reliable and powerful semi-automatic pistol that was both popular with troops and a symbol of Soviet pride during World War II—the Tokarev TT-33 service pistol.

Countless propaganda photos portrayed the Tokarev in the hands of political officers and Red Army officers. The Tokarev could also withstand an astounding amount of abuse and fired a hefty 7.62 x 25 millimeter round that had no problem perforating German soldiers.

But after the war, two factors prompted Red Army planners to demand a new pistol. First, there was a desire to standardize the pistol round in the Soviet military—and the 9 x 18 millimeter round was plentiful both in Russia and the East Bloc.

Secondly, officials viewed the Makarov PM as a more modern weapon because of its German design elements. The Russians hated the Nazis but loved their guns. It was less clumsy than the Tokarev, better-made … and possessed a safety.

Starting in the late 1950s, the People’s Republic of China, Hungary, Poland and East Germany also produced Makarovs. Eventually, the militaries and police forces of 35 countries in Europe, Asia, Africa and Central America had Makarovs in their arsenals—including Afghanistan.