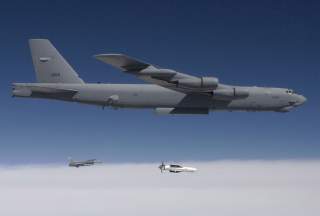 Key point: The MOP bomb will increase the firepower and options of the Air Force.

The satellite-guided Massive Ordnance Penetrator, otherwise known as MOP, is a 30,000-pound bomb with a 6,000-pound high-explosive warhead that is designed to destroy hard and deeply buried targets such as reinforced-concrete bunkers and deeply buried tunnel facilities.

In 2011 Boeing developed a modified fuse design for the GBU-57 super bomb. Boeing has developed the Massive Ordnance Penetrator at the company's facilities in St. Charles, Mo., for the U.S. Defense Threat Reduction Agency (DTRA).

The U.S. Air Force B-2 and B-52 heavy bombers carry the Massive Ordnance Penetrator for dropping from high altitudes. Boeing completed a static tunnel lethality test of the MOP munition in March 2007 at DTRA's weapons tunnel complex at White Sands Missile Range, N.M.

The Massive Ordnance Penetrator super bomb was developed amid heightening worldwide concern of the mounting capability to build and deploy nuclear weapons in countries such as Iran and North Korea that are openly hostile to the United States.

The conventional Massive Ordnance Penetrator is 20 feet long, and is designed to penetrate targets more deeply on impact than any other existing nuclear bunker-busting weapon, and then detonating its three-ton explosives payload.

As such it requires extremely ruggedized fuzing, guidance, and other on-board electronic components to survive and operate through the huge G-forces of impact from high altitude.