Meet the Navy's MQ-25 Stingray: A New Drone That Can Refuel Stealth Fighters 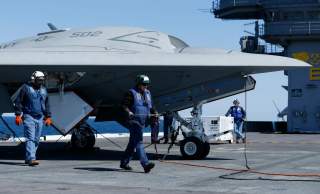 Key point: What better way to help stealth fighters stay flying than with a stealth refueling drone? As drones become more common, the Air Force is rushing to see what jobs it can automate.

This first appeared in Warrior Maven here. This piece was first featured in 2018 and is being republished due to reader's interest.