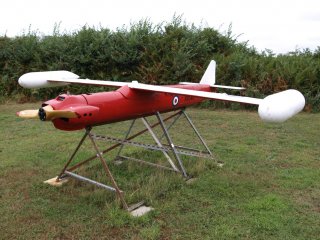 Unmanned Aerial Vehicles (UAVs) have become an important part of the U.S. military’s arsenal. UAVs have become crucial intelligence gatherers often with strike capabilities, and experts predict that global spending on these platforms will increase from a projected $11.1 billion in 2020 to $14.3 billion by 2029.

Also known as “drones,” these unmanned aircraft provide military leaders a real-time “eye in the sky” while also allowing the military to rain hell from above. A drone was used to kill Qassim Suleimani, Iran’s top security and intelligence commander, earlier this year and it is likely that the general never knew he was even in the crosshairs.

The history of drones actually goes back to the 1930s when the Radioplane Company developed a series of radio-controlled model airplanes that served as aerial targets for antiaircraft gunnery training by the U.S. Army Air Corps. These were far from toy planes and were actually small piston-powered aircraft that featured metal fuselage and wooden wings. The U.S. Army’s designation for the aircraft was OQ-19A through OQ-19D.

The technology improved vastly after the Second World War, when Radioplane was acquired by Northrop Aircraft, and eventually became known as its Ventura Division. Among one of the most successful gunnery targets was the MQM-36 “Shelduck,” which had a wingspan measuring some 11 feet 6 inches, and a total length of 12 feet 8 inches. Some 60,000 of these flying target drones was built, and it was used by at least 18 nations internationally.

It was clear that these unmanned vehicles could do more than just be shot at, and in the 1950s work progressed on what became the Radioplane RP-71 Falconer, the U.S. Army’s first unmanned reconnaissance aircraft. It was similar in appearance to the Shelduck, but had a slightly longer and stockier fuselage. It featured an early autopilot system with radio-controlled backup.

Re-designated the MQM-57, the Falconer carried cameras as well as illumination flares for night reconnaissance. It was able to conduct short-range battlefield photography or video surveillance. The cameras were loaded through a hump in the back of the between the wings.

This UAV was launched from a lightweight stand with the aid of two takeoff rockets, while a remote ground operator flew the Falconer via radio signals while it was tracked by radar. While it could provide an overhead surveillance in a way that was previously unavailable, this early UAV only had a flight endurance time of a little more than a half an hour, which limited its use. At the end of the mission the MQM-57 floated to the ground underneath a parachute that was deployed from the top of fuselage.

Radioplane, which became a division of Northrup, built a total of 1,455 Falconers and it served with the U.S. Army and NATO well into the 1970s paving the way for today’s modern UAVs.