Meet Project Overlord: The Marines' Plan for Robot Ships to Move Their Soldiers and Supplies 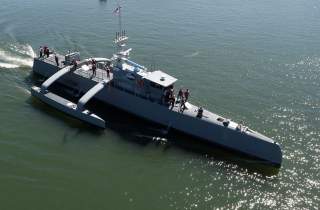 Earlier this year Navy leaders requested $400 million from Congress for two LUSVs in the 2020 proposed defense budget, with eight more to be purchased over the next five years.

The future Navy LUSV could rendezvous with Navy amphibious assault ships offshore to move Marines and supplies quickly where needed, at perhaps lower costs and less risk to human ship crews than is possible today, Smith told AUVSI attendees in a keynote address.

Unmanned systems "are less expensive than people," Smith pointed out in his address. The future LUSV also could augment Navy and Marine Corps reconnaissance and surveillance in contested areas by launching and recovering unmanned aerial vehicles (UAVs) with on-board sensor payloads, Smith said.

Earlier this year Navy leaders requested $400 million from Congress for two LUSVs in the 2020 proposed defense budget, with eight more to be purchased over the next five years.

The Large Unmanned Surface Vessel isn't yet an officials Navy program of record, but is developing under supervision of the U.S. Department of Defense (DOD) Strategic Capabilities Office.

These unmanned marine vessels are expected to carry as much as 40 tons of personnel and cargo, and operate in 8-to-13-foot waves for as long as 90 days without a human crew.

The LUSV would use technology developed under the Sea Hunter project of the U.S. Defense Advanced Research Projects Agency (DARPA) and the Office of Naval Research in Arlington, Va. Earlier this year Navy officials announced that the Sea Hunter navigated autonomously from the U.S. West Coast to Hawaii and back.

The Overlord program will develop core autonomy, communications, command and control, and prototype autonomous vessels, with built-in hardware and software.

In addition to the Marine Corps desired cargo, transport, and surveillance missions, the future LUSV also might be able to carry payloads for electronic warfare, anti-surface warfare, and land-strike warfare.

The first phase of LUSV development involves a prototype unmanned ship with a range of 4,500 miles amid waves as high as 13 feet, with 80,000 pounds payload capacity, and the ability to generate as much as power as 75 kilowatts of 450-volt, 60 Hz, three-phase power for on-board electronic payloads.

At this early stage, Navy experts envision a LUSV about 200 to 300 feet long, about a third the size of a future Navy frigate.