Meet The Remington 783: One of The Best Hunting Rifles You Can Afford 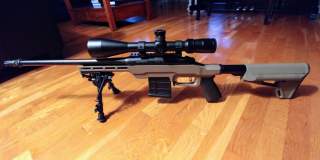 For years, people assumed that to get a high-quality rifle, a large price-tag was inevitable. In recent years, gun companies have proven that this isn’t necessarily the case. The Remington Model 783 Bolt-Action Rifle is one of the many low-cost rifles competing for the throne of being the best low price hunting rifle on the market. Let’s break down the specifics.

It doesn’t really matter how good the price of a rifle is if it can’t shoot straight. Fortunately, the Model 783 can shoot accurately—remarkably accurately. Despite the barrel showing all sorts of tooling marks, the rifle consistently hit three-shot groups at 100 yards within an inch. For a hunting rifle, that’s impressive accuracy. Once properly sighted, the Model 783 had no problems hitting targets as far as 300 yards away. The key to accuracy in rifles is stiffness—eliminate bending, warping, or twisting of the weapon as it fires and the bullet will fly straight. The Model 783’s minimum head space from the barrel nut system as well as the magnum profile barrel both contribute to making the 783 a stiff weapon that shoots accurately at distance for a fraction of the cost of other weapons.

I encountered no mechanical issues when testing the Model 783. Made entirely in the USA, the Remington 783 boasted a clean finish (especially for a low-price rifle). One version of the rifle comes with a nylon-fiber reinforced synthetic stock, while another (more pricey) version comes with a walnut stock. The walnut stock is sturdier, but the synthetic stock performed as needed. The push-action bolt turned stiffly, but I expect that the bolt will loosen some with use. All-in-all, the 783 demonstrated great reliability throughout my testing and I saw no reported issues by any other testers or reviewers.

The Model 783’s synthetic stock is the beefiest among comparable rifles. The plastic is grippy, and the Supercell recoil pad is squishy (though some complained that it was too hard for their preference). The loud and clicky safety comes with two positions (safe and fire). I found that the safety wasn’t as convenient as the tang safety (a safety where the safety slides up and down rather than clicking back and forth). The bolt (spring loaded with a one way release) comes with a flat handle that I found easy to use. The action was smooth. Unfortunately, the molded plastic sling studs felt cheap (and are more likely to break than steel sling studs). The Model 783 may not be as pleasant to handle as a top-of-the-line marksman’s rifle, but the rifle handled well and (in my opinion) outperformed its price-point.

The trigger of the Model 783 stands out. The Model 783 ships with a trigger pull weight of 5.5 pounds, but with the adjustable CrossFire trigger system, that weight can be reduced (according to Remington) to only 2.5 pounds. I wasn’t able to get my trigger that light (only 3 pounds, 12 ounces), but the ability to adjust the trigger is impressive for a rifle at this price. The trigger itself broke crisply and felt light, rather than the heavy, gritty feel many cheap hunting or survival rifles have. On the other hand, the trigger guard was plastic (not as sturdy) and oddly shaped (trapezoidal). Overall, Remington did a great job with this trigger.

The Model 783 comes with a detachable box magazine that holds four rounds. The magazine is partially plastic, partially steel, with the metal parts forming the most important parts of the magazine. The magazine was easy to load, and I encountered no issues with cartridges feeding into the chamber. The magazine itself loaded quickly and naturally into the receiver. I had no issues with the magazine falling out or not seating correctly. In fact, the magazine retention and release was better than most comparable rifles. Taking 30-06 (probably the best overall hunting caliber), the Model 783 is a bolt-action rifle. This means that to load the next bullet into the chamber, the shooter must push a bolt on the side of the rifle forward in order to fire again (rather than the gas expelled by the previous shot pushing the bullet into the chamber). This tends to make the gun more accurate, as there is less gas in the gun moving it around.

The Model 783 comes in at 42 inches long and weighs 7 lbs, 10 oz. (empty with the mag installed). Once you add rings, a rifle scope, a loaded magazine, and a sling, the weapon should have a field weight of 9 ¼ pounds. That length and weight are average for a hunting rifle.

The Model 783 comes equipped with the Supercell Recoil Pad. Remington states that it reduces felt recoil by 54 percent. I found the pad sufficient to take the edge of the characteristic hard kick a 30-06 hunting rifle gives, but others found it too stiff for their own comfort. The comfortability of the recoil pad is going to be up to your personal judgment. Overall, the rifle itself is a soft shooter for 30-06. The weight of the weapon helps take some of the kick out. Overall, the recoil management on the Model 738 is equal to or better than its competitors.

The price is the best selling point of the Model 738. For only $399, you’re getting a reliable hunting rifle at a bargain. This gun is frequently as accurate and as reliable as more expensive rifles. You might be wondering how Remington manages to cut the cost while making such an effective weapon. Higher priced rifles generally have better finishes and more metal parts than the Model 738 has. Nevertheless, these features don’t impact the accuracy or reliability of the weapon, so Remington is able to make a bare-bones, functional rifle for less than most. Speaking of accuracy, the stock scope on the Model 738 isn’t the best scope. I recommend changing yours to a Leupold VX-Freedom 3-9x40—an excellent choice for hunters.

Remington Model 783 Bolt-Action Rifle Review: Is It Worth It?

The Remington Model 783 Bolt-Action Rifle is an excellent hunting rifle for those on a budget. Here’s some of the features that make it stand out:

If you’re looking for a hunting rifle that will get the job done without breaking the bank, go for the Remington Model 783.